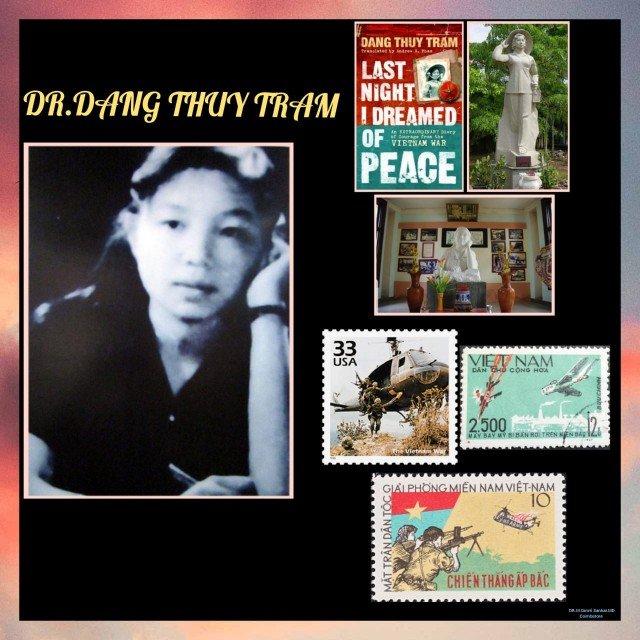 🔹Dang Thuy Tram was from a prosperous physician family. She studied medicine at Hanoi Medical University and graduated in 1967.
🔹At that time, Vietnam was under the resistance war against America (Vietnam War). Dr. Tram volunteered herself to serve as a treating physician in a battlefield hospital in the Quang Ngai Province – the killing fields in central Vietnam.
🔹Additionally, she had taken charge of training new health practitioners and treating worst wounded comrades who were severely injured by the continuous aerial bombardments. Most of the time, she was surrounded by the war action and often her life was in danger.
🔹Under such harsh and heart-wrenching conditions, she started writing diaries from April 1968. Her diary was about the miserable conditions of her family and friends, the horrors of war and her struggles towards her nation.
🔹Unfortunately, Dr. Tram was killed in the battlefield and her handwritten diaries were captured by the US forces. In fact, the American Military Officer, Captain Frederic Whitehurst, took the diary immediately after Dr. Tram’s death.
🔹He then gave a standing order to destroy all the documents. When he was about to toss the Diary into the flames, his Vietnamese translator had said to him, “Don’t burn this one. . . It has a fire 🔥 in it already.” Thus he preserved the diary even against their military regulations.
🔹When he reminisced about the diary and Dr. Tram, Whitehurst said “She was my enemy but her words would break your heart.”
🔹Moreover, Captain Whitehurst had secured the diary for 35 years with the intention of returning it to Dr. Tram’s family. But he could not reach anyone from her family.
🔹In March, 2005, an Annual seminar meet on Vietnam war was held at Texas University, United States. The participants discussed the various aspects of the war.
🔹Captain Whitehurst gave a talk about the diary of Dr. Tram. One of the press photographers in the meeting helped Whitehurst in locating Dr. Tram’s mother in Vietnam. Subsequently, they reached Vietnam and handed over the diary to her.
🔹Thereupon the diary of the young idealistic doctor was published in Vietnam and created national sensation.
🔹Furthermore, the diary was translated into English as “Last Night I Dreamed of Peace,” and was published in 2007. It quickly became a Bestseller and sold more than 300,000 copies within a year. It was also translated into sixteen other languages.
🔹In order to honor Dr. Tram, Vietnamese President Tran Duc Luong awarded her the title, “Hero of the People’s Armed Forces,” for her outstanding contribution during the resistance war against the US Army.
🔹Thus, Dr. Tram is celebrated as a revolutionary martyr. Her diary is an extraordinary document that clearly narrates her personal, political struggles and her feelings towards war, love, family and her ethical code.