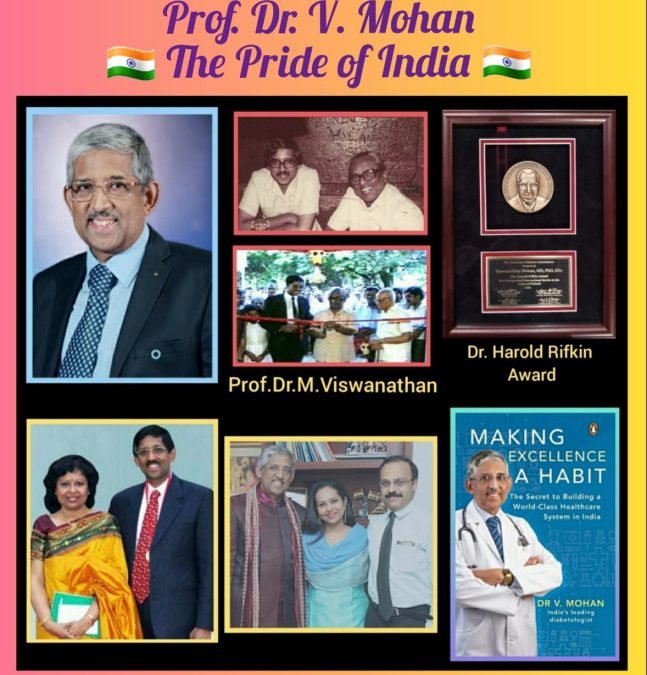 🔸Dr. Mohan was born in 1954, in an illustrious doctor family. His paternal grandmother was one of the first doctors in a small town called Irinjalakuda in Kerala.

🔸His father Prof. Dr. M. Viswanathan, is fondly referred to as the “Father of Diabetology in India” as he was the first to start a Diabetic Clinic in Post Independent India at the Government Stanley Medical College, Chennai in 1948. He was also the first to start a private hospital exclusively for diabetes healthcare in 1954.

🔸During his school days, Mohan was fascinated with English literature and poetry and wanted to pursue writing as a career.

🔸His father Prof. Viswanathan however had other ideas. He inspired Mohan to take up medicine by telling him that even as a researcher he could be a writer and told him about the epoch-making discovery of insulin by the Canadian Surgeon, Frederick Banting and the medical student, Charles Best.

🔸Following his father’s advice, Mohan decided to study medicine and joined the Madras Medical College (MMC) in 1971. Importantly, during his MBBS career, apart from winning several medals and prizes, he was also the Captain of the MMC Athletics Team.

🔸He also participated in debates, fine arts and even wrote a book of poems. He worked as a research assistant with his father and published 20 research papers, which is a record of sorts.

🔸Dr. Mohan then did his MD (Internal Medicine) at MMC and stood first in Madras University – winning the Dr. R. V. Rajam Gold Medal while Dr. Rema Mohan completed her DO in Ophthalmology in the same college.

🔸During the years 1985 and 1986 Dr. Mohan and Dr. Rema worked abroad for one year at the Hammersmith Hospital & Royal Post-Graduate Medical School, London and another year at the University of Ulm in Germany.

🔸Later, Dr. Mohan successfully completed his PhD and Doctor of Science (D.Sc) by thesis – the highest research degree in India.

🔸In 1991, Dr.V. Mohan and Dr. Rema Mohan established their own centre Dr. Mohan’s Diabetes Specialities Centre at Gopalapuram in South Chennai and Dr. Mohan became its Chairman and Chief of Diabetology.

🔸Today, Dr. Mohan’s Diabetes Specialities Centre has a chain of 50 Diabetes centres across 8 states and 32 cities of India with over 5,40,000 registered people with diabetes in their electronic records, which is one of the largest in the world.

🔅Epidemiology of Diabetes and its Complications.

🔅Genomics of Diabetes including Monogenic Diabetes.

🔸Dr. Mohan has published a record number of 1466 papers in peer reviewed journals.  This includes 940 original articles, 347 review articles and invited editorials and 179 chapters to Text-books on Diabetes. This is the highest by any medical doctor in India.

🔸His research has attracted over 1,52,000 citations and has a ‘h index’ of 138 which is second only to the celebrated scientist, Bharat Ratna, Prof. C. N. R. Rao. Dr. Mohan was ranked among Top 2% of Scientists in the World and the highest ranked scientist in Tamil Nadu, by the Stanford University Global Ranking.

🔸Dr. Mohan has been conferred with 6 Doctorates and 18 Fellowships from reputed institutions and societies including:

🔅Fellow of Royal College of Physicians of London, Glasgow, Edinburgh and Ireland.

🔅Fellow of American College of Physicians.

🔅Fellow of American College of Endocrinology.

🔅Fellow of Royal Society of Edinburgh.

🔸Dr. Mohan is a visionary, who trained a large number of physicians and diabetologists in addition to nurses, educators by starting several training courses for diabetes, which includes:

🔅Fellowship in Diabetology for Under-Graduates in Medicine.

🔅Post-Doctoral Fellowship in Diabetology for Post-Graduates in Internal Medicine.

🔅Certificate Course in Evidence-Based Management of Diabetes and several others.

🔸For his meritorious service in the field of diabetes, Prof. Mohan had received over 200 awards including the prestigious:

🔅 Padma Shri Award by the Government of India in 2012.

🔅 Dr. Jivraj Mehta Award by Association Physicians of India in 2014.

🔅 Dr. B. R. Ambedkar Centenary Award, the highest award for Biomedical research by the ICMR in 2016.

🔅 Dr. Harold Rifkin Award for Distinguished International Service in the Cause of Diabetes, one of the prestigious International Awards given by the American Diabetes Association in 2018. Dr. Mohan is the first Indian to receive this award.

🔸Dr.Mohan contributes extensively to Charity by providing Lifelong Free Service to over 9000 patients and runs 3 free Diabetic clinics in Chennai. He also serves rural India through a fully equipped Mobile Diabetes van which offers free health check-ups to villagers. He has adopted 25 villages in Kanchipuram District of Tamil Nadu for treatment of deserving people with diabetes.

🔸Dr. Mohan’s autobiography “Making Excellence a Habit: The Secret to Building a World-Class Healthcare System in India” published by Penguin India, is a best seller on Amazon India and is a ‘must read’ book for everybody particularly by all youngsters.