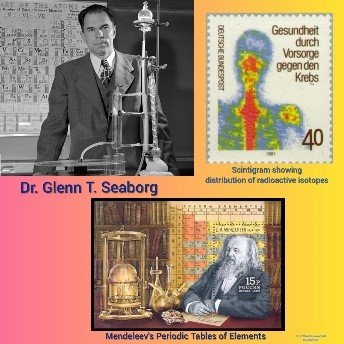 🔸Seaborg was very much inspired by his chemistry teacher, when he was young. Thereby, he became interested in chemistry.

🔸Seaborg began his carrier at the University of California, as a nuclear chemist and discovered around 10 radioactive elements such as plutonium, cerium, nobelium… thus, he created an actinide series in the Mendeleev’s Periodic Tables of Elements.

🔸In fact, his assignments in investigating isotopes greatly contributed to the discovery of more than 100 isotopes of elements.

🔸Subsequently, Seaborg’s elements were being used in the field of medicine and he became a pioneer in nuclear medicine.

🔸His radioactive isotopes utilized in the field of medicine are…

🔹 Cobalt – 60, used as a radiation source for medical radiotherapy.

🔹 Technetium-99m, which is a diagnostic radioisotope used widely in…

🔸His ground breaking discovery of 10 transuranium elements led him to receive the most prestigious Nobel Prize in Chemistry in 1951 at the age of 39 years.

🔸Conferred as an honour, his element Seaborgium was released in his name in the year 1997. That was the first time, the element was labelled with its scientist’s name (for a living person).

🔸Dr. Seaborg was actually living with the principle of “There is a Beauty in Discovery.”

A True Giant of the 20th Century