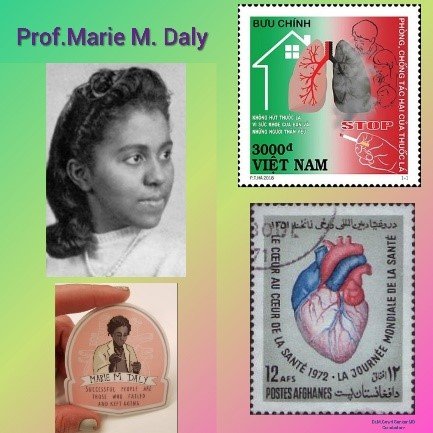 🔹Daly was an avid reader even from early school days. She had read about many scientists and their inventions.

🔹In fact, she was fascinated by the popular book – The Microbe Hunters, which inspired her day by day and pushed her to become a scientist.

🔹During her time, she faced the dual hurdles of gender discrimination and racism in her school and college days.

🔹In spite of all these hurdles, she enrolled herself for higher studies and successfully completed her Doctorate in chemistry in 1947 and became the First Ph.D. Women of African-American origin.

🔹Her long and distinguished research career was backed by…

🔹After completion of her studies, she worked as a Professor in Biochemistry at Albert Einstein Medical College and she engaged in teaching medical students until her retirement in 1986.

🔹Her research outputs are as follows…

🔅 She studied the composition of the nucleic acid in cell nuclei and explained the role of cytoplasmic ribonucleoprotein in protein synthesis. Her research on proteins helped Watson and Crick in their explanation of DNA.

🔅 She contributed significantly to the understanding of the uptake of creatine by muscle cells.

🔅 She then unlocked the secrets of hardening arteries by publishing the relationship between the aging, diet, hypertension, atherosclerosis and coronary artery diseases.

🔅 She also investigated the effects of sugar on the function of coronary arteries.

🔅 She became a pioneer in studying the impact of cigarette smoking on the lungs.

🔹Ultimately, she was recognised as one of the Top 50 Women in Science, Engineering and Technology by the National Technical Association, U.S in 1999.

🔹The Inspiring quote, which motivated Marie Daly was… “You learn to swim by swimming… You learn to courage by couraging.”

The Pioneer in Cardiovascular Research