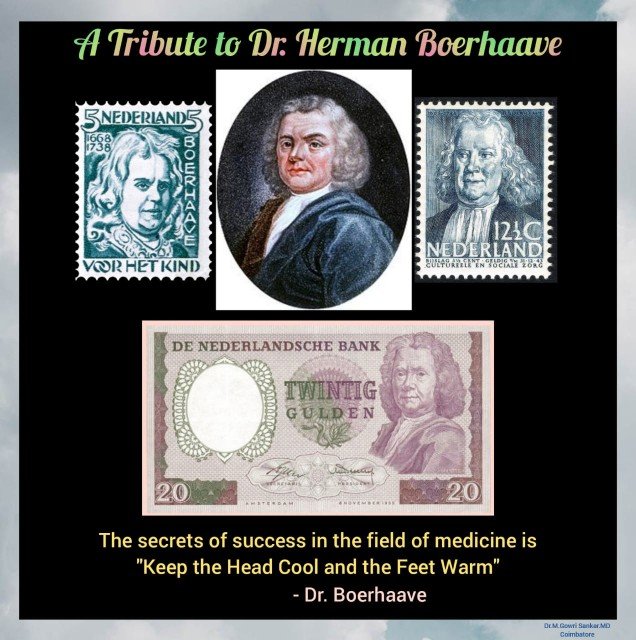 🔹Boerhaave studied philosophy earlier from the University of Leiden in 1684 and then studied medicine from the Academy at Harderwijk in 1693.
🔹After completion of his studies, he served his entire professional life at the University of Leiden where he began as a Professor of Botany and a Professor of Practical medicine and then Professor of Chemistry.
🔹Like Dr. Thomas Sydenham, he wanted to revive the Hippocratic method of bedside instruction. He further insisted on post-mortem examination of patients, thereby he demonstrated the relation of symptoms to lesions.
🔹Subsequently, he was praised for being the First Great Clinical or Bedside Teacher, where he implemented the modern system of teaching as taking the medical students and teaching at the patient’s bedside.
🔹Furthermore, his Innovative Medical Rounds made the University of Leiden as a famous place for medical learning.
🔹His Eponyms…
🔅 Boerhaave’s glands – The coil glands of the skin that secrete the sweat.
🔅 Boerhaave’s syndrome – Complete transmural laceration of the lower part of oesophagus occurs after forceful emesis, which was described by him in 1724.
🔹Moreover, his publications became a standard textbooks and those were widely used during and after his presence.
🔹His significant books include:
🔅Medical Principles in 1708
🔅Aphorisms on the Recognition and Treatment of Diseases in 1709
🔅Elements of Chemistry in 1724
🔹Besides, Boerhaave was one of the most influential medical scientists and a distinguished teacher of 18th century. His marvelous ideas travelled to all over Europe and transformed the medical education in a greater way.
🔹Consequently, he was highly recognized as the “Dutch Hippocrates.” He used to declare that the secrets of success in the field of medicine is “Keep the Head Cool and the Feet Warm.”

A Passionate Teacher of 18th Century