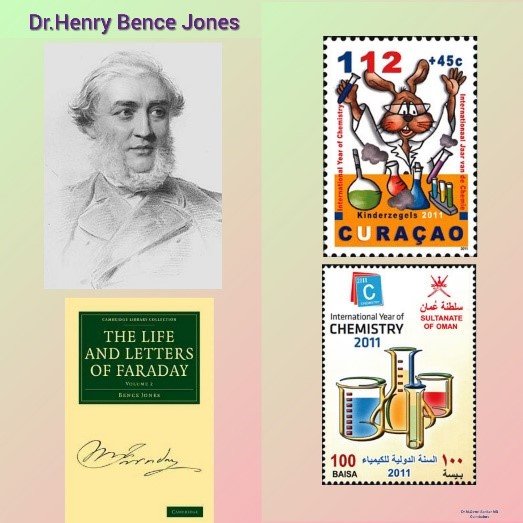 🔹Bence Jones studied medicine at St George’s Hospital in 1836. After the successful completion of his medical schooling, he studied chemistry at University College, London, according to his interest.

🔹Then he got trained in chemistry in Germany and subsequently, he was appointed at St George’s hospital, London. Afterwards, he became a full-time physician and also the Fellow of the Royal College of Physicians in 1849.

🔹In fact, he was the first to insist on examining the urine as a standard procedure in diagnosing clinical diseases both chemically and with the microscope.

🔹He further published his studies on many topics including renal calculi. He was the first to reveal the presence of Sulphur in Cysteine calculus.

🔹Moreover, he was the first to describe the abundance of urate crystals in the urine among gouty patients.

🔹Thereupon, he found that sugar in diabetic urine was still being identified in the urine despite withhold of sugar.

🔹In the year 1845, he recognised an unusual protein presents in the urine of a patient affected with malignant bone disease (myeloma). And he predicted that it plays an important role in diagnosis. Hence, he named it as Bence Jones Protein. It’s the “First Biochemical Test for Detection of Cancer.”

🔹During his career, he was very intimate with the champions Charles Darwin, Thomas Huxley, Florence Nightingale and most close with the physicist Michael Faraday.

🔹In addition, Dr. Bence Jones wrote several scientific papers and published many scientific books including the comprehensive biography of Michael Faraday’s The Life and Letters of Faraday in 1870.

🔹Eventually, The Founder of Modern Nursing “Florence Nightingale” highly praised him as “The Best Chemical Doctor in London.”

A Physician Who Emphasised the Value of Urine Analysis

The Father of Clinical Chemistry