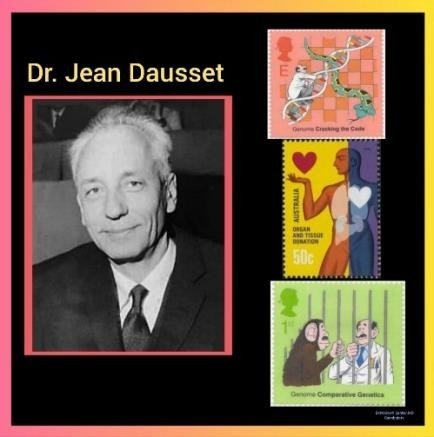 🔸Dausset studied medicine at the University of Paris. His father was a physician and he took part in the First World War. Dausset was quite impressed by his father so he wanted to follow his footsteps.

🔸Unfortunately his study was interrupted due to Second World War. Hence, he was sent to serve in French Army. He was posted in North Italy and served there for a year.

🔸Initially he was assigned at an Ambulance Service. Thereby he performed many blood transfusions of wounded soldiers. Ultimately, he studied the transfusion related reactions.

🔸After the Second World War, he completed his MD and was then appointed as a Director of Laboratory at National Blood Transfusion Centre. He worked there for the next 23 years.

🔸Dr. Dausset’s discovery in1958 became an essential contribution in identifying the MHC in Humans. He was the first to reveal the Human Leukocyte Antigen (HLA) and named it as HLA-A2.

🔸By using of MHC / HLA, Dr. Dausset went on to find the matching possibility of organ donors and the recipients. Thereby the incidence of transplant related rejections reduced drastically.

🔸Eventually, Dr. Dausset was honoured with the shared Nobel Prize of Medicine with Dr. George Snell and Dr. Baruj for their contributions to Immunology.

🔸Dr. Dausset granted his Nobel Prize money to begin the Centre for the Study of Human Polymorphisms (CEPH), later it was renamed as Foundation Jean Dausset – CEPH, a Human Genome Centre in 1984.

🔸His contribution in Immunology have reached far beyond transplantation. Nowadays, our scientists are building up the relationship of HLA with autoimmune diseases, infectious diseases and various cancers.

The Physician Who Transformed the Understanding of Human Immune System