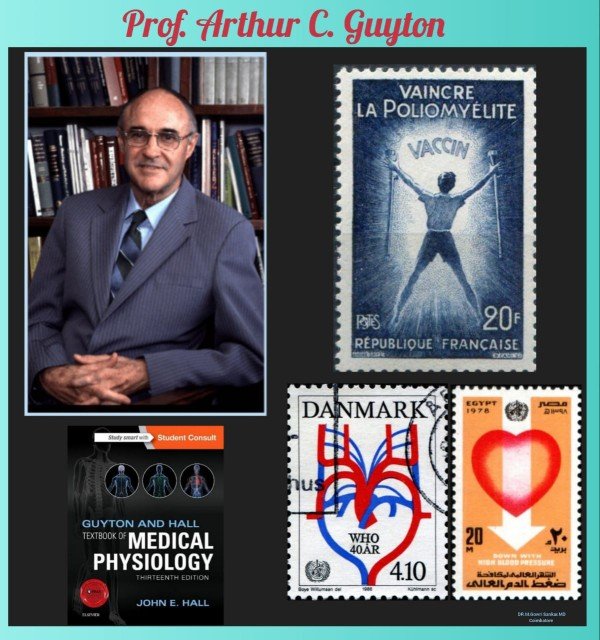 🔹Guyton was born to a physician father. His father was a Dean of the medical school in Oxford. Guyton was very much inspired by his father’s profession so he also studied medicine at Harvard Medical School.
🔹During his college days, Guyton was very brilliant and his Biophysics Professor was very much impressed by the way he worked on measuring and differentiating ions in a solution. Thereby, he was offered a small lab to do his experimental work during his spare time.
🔹While on his residentship, Guyton unfortunately suffered with polio, paralyzing his right leg, left arm and both the shoulders.
🔹Even though he suffered, he didn’t succumb to the crippling effects of polio. Whereas he designed his own supporting equipments such as leg brace, a hoist to move on from bed and a motorized wheelchair controlled by an electric joy stick.
🔹Then he joined as the faculty at Oxford University’s School of Medicine in 1947.
🔹Later, he became a Professor and was gradually promoted as a Chairman of the Department of Physiology and Biophysics at the medical school of University of Mississippi in 1948. He served in that post until his retirement in 1989.
🔹Moreover, he did an extensive research on animals to study the interrelationships between cardiac function and systemic vascular function. His analysis was helpful in understanding:
🔅Cardiac output and venous return.
🔅Negative interstitial fluid pressure and regulation of tissue fluid volume and edema.
🔅Regulation of tissue blood flow and whole body blood flow auto-regulation.
🔅Renal-pressure natriuresis.
🔅Blood pressure regulation.
🔹Thereby his work laid the foundation for generations of cardiovascular and hypertension researchers.
🔷Furthermore, he published more than 600 research articles. Also, based on his scientific research and classroom lectures, he authored one of the Best-selling book in 1956 “Textbook of Medical Physiology” – a widely used standard medical textbook.
🔹His textbook is highly recognized as one of those rare medical books written by one author- running in its 13th edition now and translated into 15 languages so far. The recent editions have been updated by his former student and successor Dr. John E. Hall.
🔹He received numerous major honors, some related to cardiovascular and hypertension research:
🔅Ciba Award from the Council for High Blood Pressure Research.
🔅William Harvey Award from the American Society of Hypertension.
🔅Sharp and Dohme Award of the International Society of Hypertension.
🔹In fact, Guyton has ten children – 8 sons and 2 daughters. All of them graduated from the Harvard Medical School.
🔹Moreover, they all became celebrated physicians as ophthalmologist, two orthopedic surgeons, two cardiothoracic surgeons, two anesthesiologists, one rheumatologist, one internist and one professor of medicine.
🔹Prof. Guyton inspired his children by the way of his life – one of his sons went on to say “We became his legs and his hands and we were guided by his mind.”
🔹His marvellous contributions and inspiring life have made Prof. Guyton to be celebrated as a “Giant in the field of Physiology” and a “Master Teacher.”

An Inspiring and Immortal Physiologist