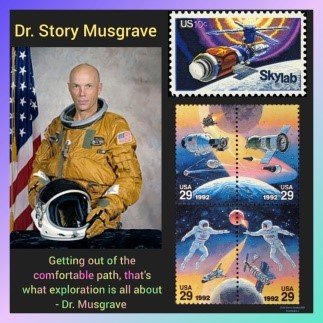 🔸Musgrave pursued BS in maths and statistics at Syracuse University in 1958. He then earned his MBA in Operations Analysis and Computer Programming. Thereafter, he pursued a BA in chemistry.

🔸In 1964, he received his MD from Columbia University College of Physicians and Surgeons. He also did his fellowship from the Air Force and the Heart Institute. Additionally he earned a Master’s degree in Physiology and Biophysics.

🔸Based on his impressive list of academic credentials, Dr. Musgrave was selected as a Scientist-Astronaut by NASA in the year 1967.

🔸After completion of NASA’s academic training, he worked on the Design and Development of the United States Space station called Skylab Program. There he orbited the earth from 1973 – 1976 as a backup Science Pilot.

🔸Simultaneously, he worked as a trauma surgeon and pioneered the research in Cardiovascular and Exercise physiology and Temperature Regulation in Aviation Medicine at his 30th year of service in NASA.

🔸He also published more than 25 scientific research papers and authored The NASA Northrop T-38- A Photographic Art from an Astronaut Pilot.

🔸Furthermore, he is considered a mission specialist because he is the only person to have flown on all United States space shuttle orbiters. Thereby he has spent a total of 1,281 hours, 59 minutes, 22 seconds on space missions, including 27 hours of space walk.