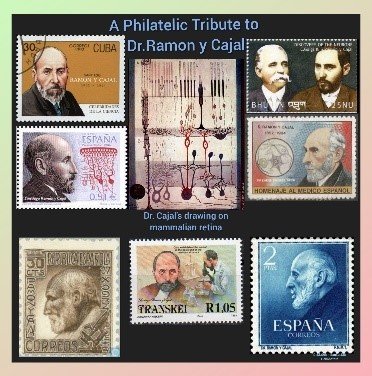 🔹Dr. Ramon y Cajal is considered the Father of Modern Neuroscience. Apart from being a man of medicine, he was an elegant painter and very much skilled in transforming the visible onto the paper.

🔹He studied medicine and received his Doctorate in Medicine from the University of Saragossa in 1870.

🔹His father was working in the same institute as an anatomist, while he was studying there. By his guidance, Cajal became skilful in anatomical dissection.

🔹After his studies, Dr. Cajal began his career as a faculty and then became a Professor of Anatomy in the University of Madrid in 1892. There, he dedicated the next 30 years of his life in investigating the brain structures.

🔹In order to support his brain studies, he additionally introduced many staining methods such as gold stain and further he improved Italian biologist Dr. Golgi’s silver nitrate stain method.

🔹In fact, he was an early adopter of microscope. By using his staining methods, he revealed the underlying histology of cerebrum, cerebellum, retina, spinal cord of embryo and muscles.

🔹Moreover, he was the first to state that the brain is made up of neurons and these are separated from one another by microscopic gaps (later called synapses by Sir Charles Scott Sherrington).

🔹Further, his investigation led to the development of the “NEURON DOCTRINE,” which became the foundation for neuroscience.

🔹To honour the ground-breaking work on the structure of the nervous system, Dr. Cajal and Dr. Camillo Golgi, were awarded with shared Nobel Prize of Medicine or Physiology in 1906.

🔅Cajal-Retzius cells – A cell type in the marginal zone/layer I of the developmental cerebral cortex.

🔹Over five decades, he created 2900 Neuroanatomical drawings through his sketches. He also made hand drawings for an Atlas of Anatomy and Histology with meticulous technical illustrations.

A Physician Who Laid Foundation for Neuroscience

A Neurophysician with Beautiful Brain