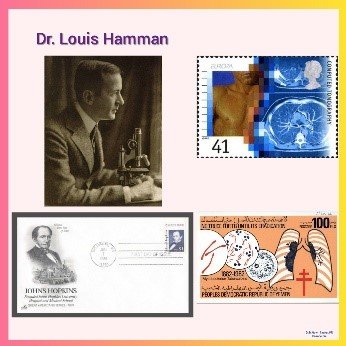 🔹Hamman was born in Baltimore, U.S. He studied medicine at the Johns Hopkins University School of Medicine and earned his M.D. in 1901.

🔹He then began his career as a faculty in The Johns Hopkins Hospital and worked the next 30 years in the capacity of a skillful physician.

🔹In fact, his distinguished diagnostic skills earned him the recognition of one of the best clinicians in his period.

🔹During his career, he was interested in focusing on Pulmonary tuberculosis – which led him to begin a Tuberculosis clinic at The John Hopkins Hospital.

🔹He was also a co-author of a book called Tuberculin in Diagnosis and Treatment.

🔹Moreover, he was one of the first to outline the Principles of Glucose Tolerance Test and described the response of blood sugar to orally administered glucose.

🔅 Hamman syndrome or disease – Spontaneous subcutaneous emphysema along with pneumo-mediastinum.

🔹In order to honour his service, the General Medical Clinic at Johns Hopkins School of Medicine was renamed as Hamman-Baker Medical Clinic in the year 1975.