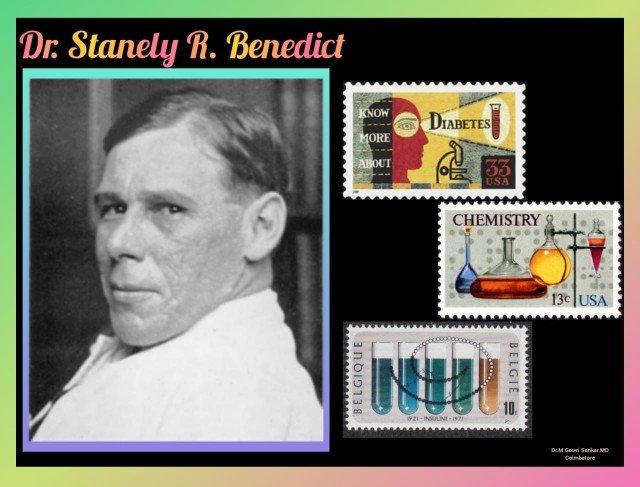 🔸Benedict was born in Cincinnati. His father was a professor of philosophy and psychology and his mother was a teacher so he grew up in the intellectual atmosphere.
🔸After his schooling, he enrolled to study medicine at the University of Cincinnati. While studying medicine, he was highly inspired by his biochemistry professor. So he abandoned medicine and studied biochemistry for teaching and research.
🔸After completing his biochemistry studies, he received his Ph.D. in Physiological Chemistry at Yale University in 1908. He was being a passionate teacher taught biochemistry to the medical students at the medical school of Cornell University until his death.
🔸Also, he was a prolific researcher considered one of the Principal figure in the “American School of Biochemistry”.
🔸He conducted an extensive research in basic biochemical analysis on urine for sugar, urea, creatinine, ammonia, uric acid…
🔸However, he is well known for his discovery of BENEDICT’S REAGENT, a solution used to detect reducing sugar in urine.
🔸His reagent is a bright blue chemical solution which is a mixture of sodium citrate, sodium carbonate, and copper sulfate.
🔸Benedict test Procedure – On mixing of reagent with urine in a test tube, heat for 2-3 minutes and then allow to cool the tube. Then the color of mixture changes according to the concentration of the reducing sugar such as glucose in urine.
🔸Shortly, his test became the most common rapid screening test for glycosuria and in diabetes.
🔸Moreover, he served as the editor-in-chief of Journal of Biological Chemistry from 1925 to 1936, which covered the most of research in areas of biochemistry and molecular biology.