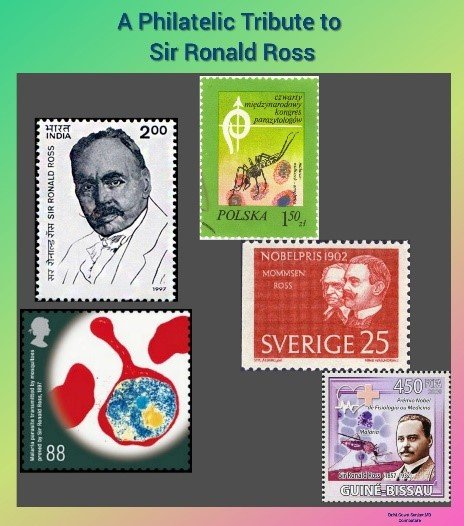 🔸Malaria was an ancient disease believed to spread by vapours in those days. The term Malaria originates from two Medieval Italian words ‘mal‘ and “aria‘ which means (“Bad air”).

🔸But the French Physician Dr. Alphonse Laveran discovered malarial parasites in 1880 in a blood smear taken from a patient who had died of malaria.

🔸History awaited the scientists to reveal the mystery of malarial transmission.

🔸Ross was born in Almora town, India to a father who was a British Military Officer.

🔸He studied Medicine at St Bartholomew’s Hospital at London in 1875 and he entered into Indian Medical Service in 1881.

🔸 He was a Polymath who had shown great interest in poetry, literature, music and mathematics throughout his life.

🔸He was appointed as a medical officer for military regiment and worked at various places in India.

🔸During his study leave from June 1888 to May 1889 he joined a Diploma in Public Health at Royal College of Physicians and Surgeons, London. His scientific interest was growing day by day while studying.

🔸 He consulted his mentor Sir Patrick Mansion, the Father of Tropical Medicine. Dr. Mansion had briefed him regarding the real problems in malaria research and encouraged him to choose India to study.

🔸As per his mentor’s advice he returned to India and started focusing on malaria research. While dissecting the stomach tissues of an Anopheles mosquito, he found the malarial parasite.

🔸This landmark discovery was done at Secunderabad on 20th August 1897. Then he proved that the female Anopheles mosquito plays the main role in transmission of malaria parasites in humans.

🔸In 1898, he spent some days in Calcutta, where he investigated the “Life cycle of the malarial parasites in birds.” He confirmed that mosquito as an Intermediate host in Avian malaria.

🔸In 1899, he resigned his Medical Service in India and joined as a faculty in the Liverpool School of Tropical Medicine, London. He continued his work on prevention of malaria all over the world.

🔸Eventually, his hard work was awarded in 1902 with the Nobel Prize in Physiology or Medicine for his enormous work on the transmission of malaria. He received many honours in addition to the Nobel Prize.

🔸Based on his successful investigations, he published a book called The Prevention of Malaria in 1911.

🔸To confer an honour The Ross Institute & Hospital for Tropical Disease was opened in London as a memorial in 1916.

A Physician Raised for Cure