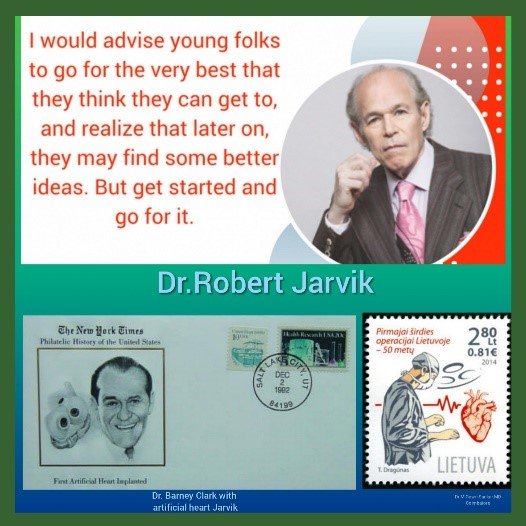 🔸Jarvick had played a major role in the invention of the first artificial heart. Actually, he got interested in medicine by observing the surgeries performed by his father Dr. Norman Jarvick.

🔸In fact, Jarvick started his research from his high school days. He had a patent for an “Automatic Stapler” for surgical procedures at a very young age. This stapler freed the surgeons from having to manually clamp and tie blood vessels during surgeries.

🔸He also had an avid interest in arts, so he joined the Syracuse University in 1964 and properly studied mechanical drawing and architecture.

🔸Suddenly, his father suffered cardiac illness and had to undergo open heart surgery. This situation made him to think about the need of heart transplants. Thus he became interested in medicine and decided to pursue a medical career.

🔸During his medical studies at the University of Utah he joined in Artificial Organ Program headed by his mentor Dr. Willem Johan Kolff, who had invented the first dialysis machine.

🔸There were several artificial heart devices around the mid 1970s but those were temporary implantable heart models.

🔸In 1982, Dr. Jarvik designed and developed the First Permanent Implantable Artificial heart in the name of “Jarvik 7.

🔸An American Cardiothoracic Surgeon Dr. William DeVries performed the first total artificial heart transplant with Jarvik-7 on a retired Dentist Dr. Barney Clark. The surgery was successful and he lived for 112 days. But he died from multiple organ failure.

🔸Subsequently, the development of an improved artificial heart continued…

🔸Further, he founded Jarvik Research Institute in 1987 and continued his invention. Additionally, he invented Jarvik 2000, a Left Ventricular Assisted Device. Further, through his inventions, he holds more than 30 patents related to cardiac devices.

A Physician Whose Inventions Keep on Pumping