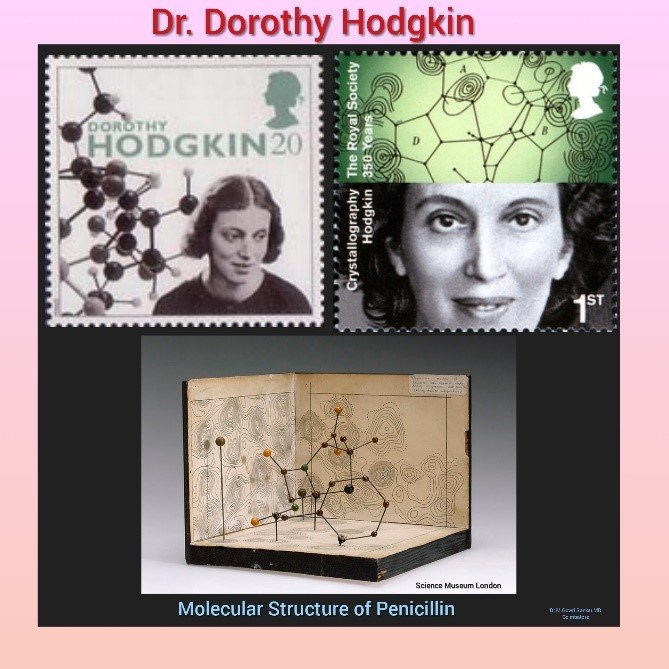 🔹When Dorothy was 15 years old, she read a book called “Concerning the Nature of Things” written by Sir William Henry Bragg. This book aroused her curiosity to study the properties of atom and molecules by using X-rays.

🔹She had studied the subject of Chemistry at Sommerville college and Oxford University. And then did her Doctorate in University of Cambridge.

🔹In fact, Dorothy was one of the Pioneer scientists and was well known for her developing the X-ray Crystallography method. It was the key to study and understand the Three-Dimensional Structure of biochemical compounds.

🔹During the second world war, the penicillin was in a great demand and this forced her to find a remedy. Hence, she studied and discovered three-dimensional structure of Penicillin in 1945.

🔹The knowledge of the penicillin structure ultimately opened new avenues for developing semi-synthetic derivatives of penicillin which had initiated the creation of Antibiotic era.

🔹After that, she spent around 6 years – from 1948 to 1954 – exclusively, to discover the molecular structure of Vitamin B12 to fight against the deadly Pernicious anaemia.

🔹Eventually her passion was rewarded. She was the third women to be awarded with Nobel Prize for Chemistry for her extreme contribution in discovering the molecular structure of Vitamin B12.

🔹In 1934, she was given a crystalline Insulin to study its molecular structure when X-ray crystallography had not been developed. IN 1969 she successfully discovered its three-dimensional structure in her laboratory after her consistent work of 35 years.

🔹Moreover, she was recognized for determining the structure of steroids, vitamin D and cholesterol.

🔹Unfortunately after some time, she was diagnosed with Rheumatoid arthritis and later, she spent her days in a wheelchair. However, her passion for research work is immeasurable.

🔹Her words in her final stage…”I realise that for 90% of my life, I am dealing with failure and occasionally I have a success.”

A Scientist with Sparkling Career and Analytical Brilliance