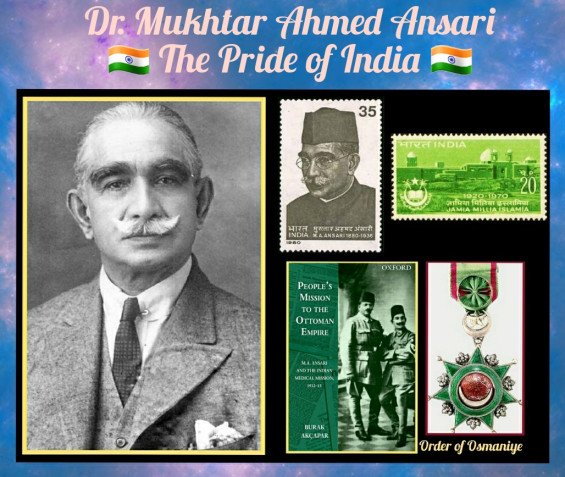 🔹Dr. Ansari was born in the town Yusufpur in Ghazipur District of Eastern Uttar Pradesh. During his early days, his family migrated to Hyderabad. He belonged to the family of Hakims in the field of Unani medicine.

🔹Unlike them, Ansari joined to study Western medicine at Madras Medical College. After his graduation, he got a scholarship to study medicine in Britain. In 1908, he completed his Doctor of Medicine and Master of Surgery, from the University of Edinburg.

🔹In London, he had a successful medical career, where he served as Registrar at London Lock Hospital. Also, he was the first Indian appointed as a Resident Medical Officer in Charing Cross Hospital, London.

🔹In the early 20th century, medical journals were largely documenting Xenotransplantation which inspired Dr. Ansari extensively. Hence, he visited many countries and worked with famed surgeons, who pioneered in transplanting the tissues and organs of animals to humans.

🔹In fact, he performed hundreds of grafting operations. Based on his successful experiments, he published a book called “Regeneration of Man.”

🔹Simultaneously, he got involved in the Indian Independence Movement and took part in the country’s political developments.

🔹In 1910, he joined in Indian National Congress and Muslim League. He became one of the front leaders of Congress and served as its President in 1927 and as a secretary for several years. He also remained a member of the Congress Working Committee all through his life.

🔹He was a close friend of Mahatma Gandhi and strongly adherent to his core teaching of Ahimsa. Dr. Ansari’s house in Delhi was a meeting point for Congress leaders.

🔹He continued to work hard for Hindu-Muslim unity and was a symbol for the same.

🔹Moreover, he led the Indian Medical Mission to treat Turkish wounded soldiers during Balkan War in 1912. In Turkey, he established two field hospitals and did many humanitarian roles, thereby winning the hearts of the Turkish public as well as their leaders.

🔹His medical service at Balkan war was honoured with “Order of Osmaniye,” which was a civil and military decoration of the Ottoman Empire. Also, he successfully led Khilafat Delegation to England in 1920.

🔹He was one of the founding fathers of the Central University of India the Jamia Millia Islamia University at Delhi and he served as Chancellor from 1928 to 1936.

🔹To honour his surgical skills an exclusive surgery ward was established in his name “Dr. Ansari Ward” in Charing Cross Hospital, London. 🔹During the British Government, Indian political leadership was mainly dominated by lawyers and journalists. But Dr. Ansari was a great exception who had skillfully balanced his medical profession and political career for the welfare of the nation.

A Vibrant Physician & One of the Builders of Modern India