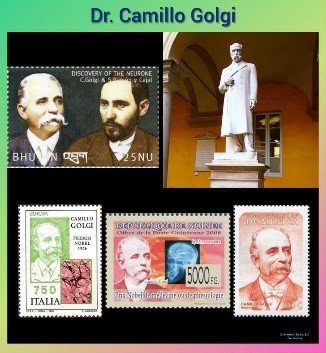 🔸Golgi was born in a small village called Corteno (now named as Corteno Golgi in his honor). He was the son of District Medical Officer.

🔸Golgi was quite impressed by his father’s work and wanted to follow in his footsteps. Hence, he joined to study medicine at the University of Pavia and graduated in 1865.

🔸He was further influenced by Dr. Giulio Bizzozero, who was a specialist in histology of nervous system. Golgi started his experimental medicine with Bizzozero and became an established clinician and histopathologist in 1872.

🔸In 1873, he developed a special staining technique by using silver nitrate. He was the First to reveal neural cells-the axons and the dendrites. He called this method as Black reactions (later renamed as Golgi stain method).

🔸Subsequently, he was the first to give clear description about the structure of cerebellum, olfactory bulb, hippocampus and spinal cord.

🔸Additionally, he involved himself in malaria research by helping Dr. Alphonse Laveran and proved that malaria parasite was a microscopic protozoa.

🔸He further studied about the malarial parasite and its transmission. He revealed that malaria fever is caused by asexual stage in the human blood (Erythrocytic cycle or Golgi cycle).

🔸One of the most famous beneficiary of Golgi’s work was the famous Spanish Histologist Dr. Ramon y Cajal. By using Golgi’s stain method, he discovered and declared that “Neurons are the fundamental structural unit of the nervous system.”

🔸Finally, Dr. Golgi received the shared Nobel Prize in Physiology or Medicine with Dr. Ramon y Cajal for the work on the structure of the nervous system in 1906.

One of The Founding Fathers of Modern Neuroscience