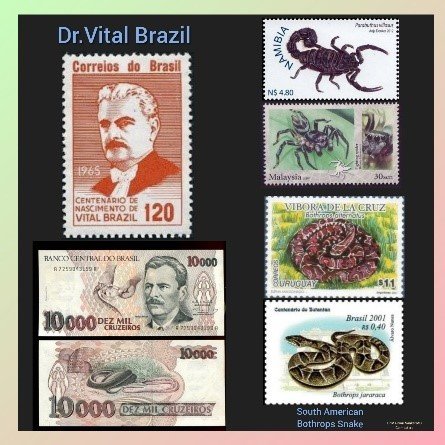 🔹Vital Brazil graduated in 1891 and began his career as a Sanitary Inspector in Public Health Sector at Sao Paulo city. During his service, he gained vast knowledge about epidemic diseases.

🔹At the time, the rural Brazil was badly suffering with poisonous snake bites. There were thousands of people dying every year. He was very concerned about these deaths and this stimulated him to find a cure.

🔹In fact, he got inspired by Dr. Albert Calmette’s development of the monovalent serum for the Indian cobra in 1892.

🔹Thereafter, he started his series of experimental investigations and developed monovalent serum against the venom of South American Bothrops and Crotalus Genera snakes in 1901.

🔹Also, he was the first to produce polyvalent serum against venomous snakes for therapeutic use. Thereby it reduced the mortality from 25% to 2%.

🔹He further developed the first Anti- scorpion serum in 1908 and Anti-spider serum in 1925.

🔹Subsequently, he established the first exclusive institute called Butantan Institution in Sao Paulo for applied toxicology and the science of venomous reptiles.

🔹To confer an honour, the scientific names of four species of South American snakes have been labelled in his name – Rhachidelus brazili, Drymoluber brazili, Bothrops brazili and Chironius brazili.