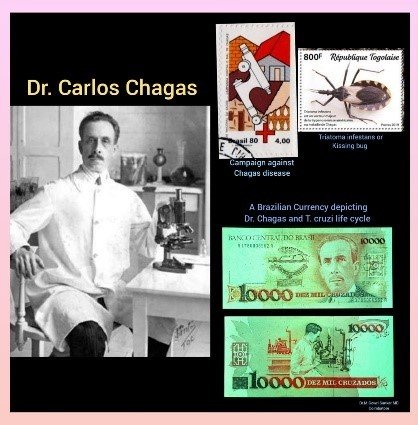 🔸Chagas was born as the son of a coffee farmer. Unfortunately, he lost his father at the very young age of 4 years. Inspired by his uncle’s Medical Profession, he did his medical studies at Medical School of Rio de Janeiro and got his Graduation in 1902.

🔸After completion of his studies, he started his career at Oswaldo Cruz Institute, where he worked with Dr. Oswaldo Cruz.

🔸Dr. Chagas was given the mission of fighting malaria during the epidemic. While doing ground work activities, he identified how insecticides could be used to thwart adult mosquitoes.

🔸Subsequently, he sanitized places by burning Pyrethrum and succeeded in his objective. This method was easily adopted and practised as the basic approach for prevention of malaria.

🔸In 1909, he was sent to combat malaria outbreak in Amazon.

🔅During his field work, he observed the swelling on the faces of many victims. He found that the swelling occurred by the bite of Blood-sucking Kissing bugs, and named it as triatomis.

🔅Also he discovered that intestine of the bugs harboured flagellate protozoa, a new species and named it as Trypanasoma cruzi (to honor Dr. Oswaldo Cruz).

🔅He also proved experimentally that it could be transmitted to humans and monkeys by the bite of bugs.

🔅Consequently, his all-Triple discovery on causative agent, vector & mode of transmission led to a new tropical parasitic disease named as Chagas disease, which is also known as American trypanosomiasis.

🔸Further, he was the first to unknowingly discover and illustrate the fungus Pneumocystis in the lung of animals infected by trypanosomiasis.

🔸 World Chagas Disease Day is observed on April 14. It was on this date in 1909 that the first patient, a Brazilian girl, was diagnosed with this disease by Dr. Chagas.

🔸Eventually, his extensive work was recognized as one of the most important achievements in the field of Parasitology.

A Physician of Outstanding Field Performance