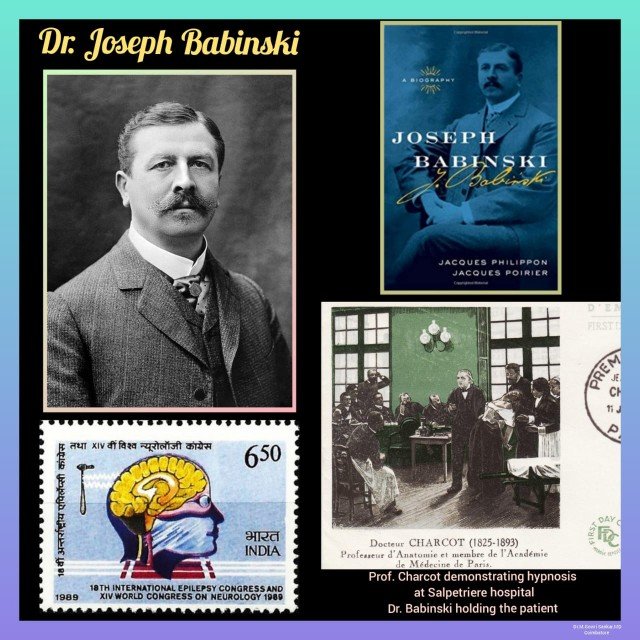 🔹Babinski was born in Paris and his father was a military officer in Poland.
🔹Babinski did his medical studies at the University of Paris in 1884. Then he worked under his mentor Prof. Jean-Martin Charcot who is known as “The Founder of Modern Neurology” at Salpetriere  Hospital, Paris.
🔹In fact, Dr. Babinski wanted to follow the footsteps of his mentor. He became interested in psychiatric diseases such as Hysteria and Psychosis. Thereby, he was the first to present about the differential diagnosis criteria for separating hysteria from organic diseases.
🔹Subsequently, Dr. Babinski became a masterly clinician, who devoted himself to the symptomatology of neurology. He was also a most brilliant scientist and his keen intellect led to epoch making discoveries.
🔹Dr. Babinski is best known for his discovery of Babinski sign in 1896. He presented a paper to the Biological Society of Paris, on a topic and that was later coined “The Babinksi Sign.”
🔹Furthermore, he was an Early advocate of hammers to elicit muscle stretch reflexes. He invented the hammer in 1912, which became one of the essential tool in neurology and was termed as “Babinski Reflex Hammer.” He further studied muscle stretch reflexes extensively and wrote a monograph on the same.
🔹In the year 1914, he conducted a research on patients with left hemiplegia who ignored or were unaware of their motor impairment. And he coined the term Anosognosia.

🔹His Eponyms…
🔅 Babinski’s sign I or Reflex: A pathological reflex where the great toe extends and flexes toward the top of the foot and the other toes fan out when the sole of the foot is firmly stroked.
🔅 Babinski sign II or Babinski’s ear phenomenon: Galvanic test for unilateral hearing disturbance.
🔅 Babinski’s sign III: The loss of the Achilles tendon reflex. A sign of sciatica, used to differentiate it from hyteric sciatica.
🔅 Babinski test: The test for Babinski’s sign, called Babinski’s test, is running a pointed instrument up the lateral border of the foot and crossing to the medial side over the metatarsal pads.
🔅 Babinski’s Method: Method for eliciting the Achilles reflex – The patient is placed on a chair in a kneeling position with the legs hanging.
🔅 Anton-Babinski syndrome: A condition characterized by denial of blindness in lesions of the occipital lobe.
🔅 Babinski-Frohlich syndrome: Condition characterized by feminine obesity and sexual infantilism in case of hypothalamus tumours.
🔅 Babinski-Froment syndrome: A neurological syndrome characterized by vasomotor and trophic disorders, diffuse amyotrophy and muscle contractions subsequently to traumatic tissue damage.
🔅 Babinski-Jarkowski rule: For localization of a medullary lesion.
🔅 Babinski-Nageotte syndrome: Syndrome seen in unilateral bulbar affections with lesions of the medullobulbar transitional region.
🔅 Babinski-Vaquez syndrome: Anisocoria may result from a syphilitic aneurysm of the aorta.
🔅 Babinski-Weil test: Test for demonstration of a laterodeviation in case of vestibular disorders.
🔹On his last days, Dr. Babinski had been asked – What he considered his most lasting achievement in life? To this he replied – Yes, the sign will be remembered, but it was not my greatest contribution. That was my guidance to the direction for Dr. Thierry de Martel and Dr. Clovis Vincent.”
🔹They both are the pupils of Dr. Babinski. Later, they became the Founders of Neurosurgery in France and pioneered many new surgical techniques.

A Neurological Semiology Genius, Immortal in the Field of Medicine