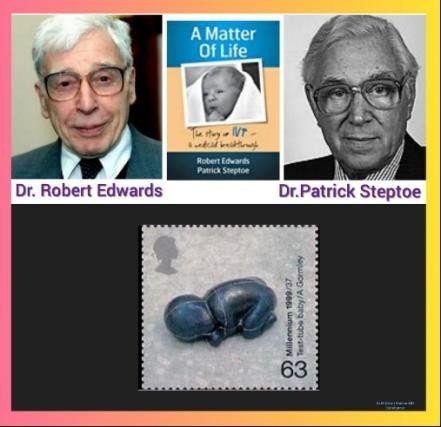 🔸During the Second World War, he was serving in the British Royal Navy. He was arrested and became a Prisoner of War in 1941 in Italy and was imprisoned until 1943.

🔸After the war, he started studying Obstetrics and then joined the Oldham General Hospital, U.K. where he learned the technique of laparoscopy.

🔸He also established a Family Planning clinic and started a bank for semen donors.

🔸Dr. Steptoe was the first to succeed in the collection of oocyte from preovulatory ovum through his laparoscopic technique. This remarkable achievement was obtained in a district hospital with local backing.

🔸He penned his experience and published it in a book – Laparoscopy in Gynaecology – in 1967.

🔸Dr. Robert Edwards, a British Physiologist from University of Cambridge, successfully achieved fertilization of the Human egg in the laboratory during 1968.

🔸Further, Dr. Edwards collaborated with Dr. Steptoe and developed the In-vitro Fertilization (IVF) in 1969 by using his laparoscopic technique.

🔸They made a breakthrough in conception through IVF. This led to the birth of the First Test Tube – Baby Louise Joy Brown – on July 25, 1978.

🔸Subsequently, they established the first IVF program for infertility patients and trained other scientist in their technique.

🔸Dr. Patrick Steptoe is remembered for his significant contribution in human reproduction biology.

An Obstetric Surgeon’s Scope with Laparoscope