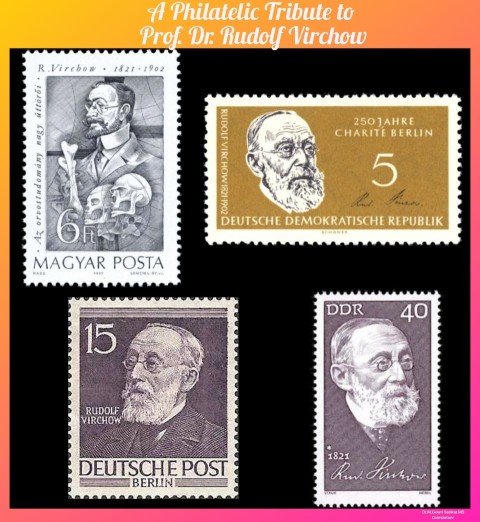 🔹Rudolf Virchow studied medicine at the University of Berlin and graduated in 1843.
🔹He then did his internship at the Charity Hospital, Berlin and also studied Pathological Histology. There he identified and named the disease leukemia and published a case report on the same.
🔹Subsequently, he began his new journal called Virchow’s Archive in 1847, in which he worked all alone as an editor for around 50 years.
🔹Simultaneously, he served as the first Chair of Pathological Anatomy at the University of Wurzburg in 1849 and later in the Charity hospital.
🔹Furthermore, he showed interest in clinical observation, pathological anatomy and experimentation on animals.
🔹Also, he was one of the early adopter of microscope, and determined the causes of diseases at the microscopic level. Hence, he was called “Hippocrates with the Microscope.” Additionally, he used to urge his students to “Think Microscopically.”
🔹Moreover, he was the pioneer of the modern concept of pathological processes by contributing his applications on the “Cell Theory.” He further emphasized that the diseases arose primarily in individual cells of the tissues.
🔹In fact, Virchow was the first to describe and name the following diseases: Leukemia, Chordoma, Ochronosis, Embolism, and Thrombosis.
🔹He also coined terminologies such as chromatin, agenesis, parenchyma, osteoid amyloid degeneration, and spina bifida.
🔹His Eponyms…
🔅 Virchow’s triad – Triads of venous thrombus: Endothelial dysfunction, hemodynamic changes & hypercoagulability.
🔅 Virchow’s node – A metastatic cancer in a supraclavicular lymph node.
🔅 Virchow’s cell theory – Every living cell comes from an another living cell.
🔅 Virchow’s cell – Lepra cell in Hansen′s disease.
🔅 Virchow-Robin’s space – Enlarged perivascular spaces that surrounds the blood vessels of brain.
🔅 Virchow′s line – A line from the root of the nose to the lambda.
🔅 Virchow′s fifth cardinal sign of inflammation – Loss of function.
🔅 Virchow′s degeneration – Amyloidosis.
🔅 Virchow′s disease – Acute congenital encephalitis.
🔅 Virchow′s metamorphosis – Lipomatosis in the heart & salivary glands.
🔅 Virchow-Seckel syndrome – Bird-headed dwarfism.
🔅 Virchow′s method of autopsy – A method of autopsy where each organ is taken out one by one.
🔹In the year 1850, he did Anthropological studies by examining abnormal skulls and subsequently founded the “German Anthropological Society.”
🔹Besides, he was the first to develop a systematic method of autopsy. By his autopsies, he was the first to reveal Vertebral disc rupture, ochronosis and congenital pulmonary lymphangiectasia.
🔹Actually, his work brought more science in the field of medicine. Thereby he was recognized as “The Father of Modern Pathology” or “The Father of Cellular Pathology” as well as “The Founder of Modern Medicine” and “The Pope of Medicine”.

🔹In 2014, the International Society on Thrombosis and Haemostatis declared his birthday as World Thrombosis Day to raise awareness on thrombosis.

A Multifaceted Immortal Physician in Medicine