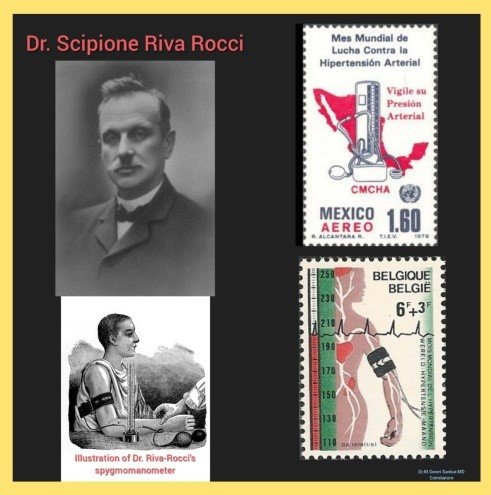 🔸Riva Rocci studied medicine at the University of Turin, Italy and graduated in 1888. He further completed pathology in 1894 and paediatrics in 1907.

🔸In early days of his career, he was very curious to treat tuberculosis. In the capacity of a clinician in a hospital, he introduced sanatorium, vaccination and radiology to fight against tuberculosis. He then researched on “Iatrogenic Pneumothorax” for treating pulmonary tuberculosis.

🔸However, he is well-known for his famous invention of an Upper arm Cuff based Mercury Sphygmomanometer for measuring blood pressure in 1896.

🔸Subsequently, he developed the apparatus by using copper pipes, bicycle tubes and mercury barometer. Also he designed an inflatable rubber cuff to encircle the arm. Earlier the rubber bulbs filled with water were used to compress the artery manually.

🔸He then calibrated and experimented with animals and humans. He did palpation of radial artery while the upper arm cuff was inflated. The pressure in the mercury sphygmomanometer at the moment of disappearance of radial pulse on palpation method marked the level of systolic blood pressure. Thereby Dr. Riva Rocci had measured systolic blood pressure.

🔸Furthermore, he wrote a series of four articles about his new method of blood pressure measurement and published them during 1896 and 1897.

🔸By using Riva-Rocci Cuff and Stethoscope, Dr.Nikolai Korotkoff, a Russian physician had described his famous Korotkoffs sound on auscultatory method in 1905. Thereupon he described both the appearance and disappearance of sounds over brachial artery and measured both systolic and diastolic blood pressure.

🔸 Dr. Harvey Cushing, an American neurosurgeon was interested in meeting Dr. Riva Rocci, upon hearing about his wonderful discovery and thereby visited him in 1911. Consequently, he became an Early adopter of Riva-Rocci Sphygmomanometer. He successfully used this apparatus to monitor his patients during anaesthesia and surgery in Johns Hopkins Hospital, Baltimore.

🔸Thereafter, while Riva-Rocci refused to patent his invention, his Upper arm cuff based mercury sphygmomanometer and his palpatory method became famous all over the world.

The Physician Behind the Mercury Sphygmomanometer