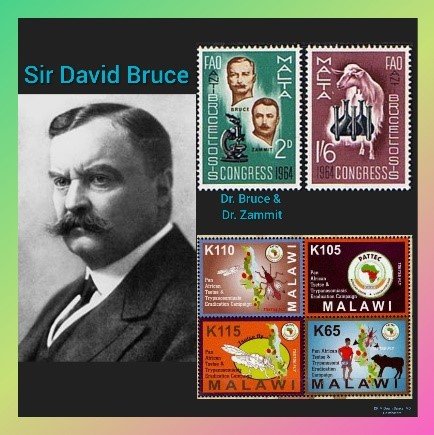 🔸Bruce completed his medical studies at the University of Edinburg and graduated in 1881.

🔸After completion of his studies, he joined in an Army Medical Services. Initially he was posted in Malta, Africa.

🔸Simultaneously, he got appointed as an Assistant Professor of Pathology in 1884 at Army Medical School, Netley.

🔸During his days, he was well impressed by Dr. Robert Koch’s recent discovery of tuberculous bacillus.

🔸Unfortunately, there was an outbreak of fever in Malta affecting hundreds of British soldiers.

🔸This terrific situation burdened his heart so he tried to initiate his research. Since there was no such research facility available, he purchased his own microscope and other equipments for research.

🔸By adapting Dr. Koch’s agar culture along with smear method, Dr. Bruce isolated the causative organism “Micrococcus melitensis” from the spleen of a dead soldier.

🔸The organism was later renamed as Brucella melitensis. The disease was called as Brucellosis or Malta fever.

🔸One of his team members, Dr. Temi Zammit, a Maltese physician, had discovered that the contaminated goat milk was responsible for the transmitting the brucella infection to humans.

🔸Further, Bruce was asked to investigate the cause for Epizootic disease, which was killing large number of cattle in 1894.

🔸Then he travelled to the place of outbreak by bullock cart & trekking. It took around 5 weeks to reach the remote place Ubombo, where he lived for two months in a hut.

🔸There, he initiated his intensive microscopic study on blood specimens and revealed a motile vibrating hematozoa named as Trypanosomiasis. Also, he identified its vector Tsetse fly.

🔸The disease is called as African trypanosomiasis (Sleeping sickness) in humans and Nagana in animals.

🔸As a recognition of his discovery, the following are named after his research…

🔅 Brucella is the genus

🔅 Brucellaceae is the family of the bacteria

🔸In fact, Dr. Bruce’s major scientific collaborator was his wife Mary Elizabeth Bruce, a microbiologist. Along with her, he published more than 30 scientific papers.

🔸Finally, Dr. Bruce who founded the basis of understanding two devastating diseases, Malta fever and Sleeping sickness concluded… “We all children of one father. The advancement of knowledge in the causation and prevention of disease is not for the benefit of any one country, but for all.”

A Physician with Scope & Microscope