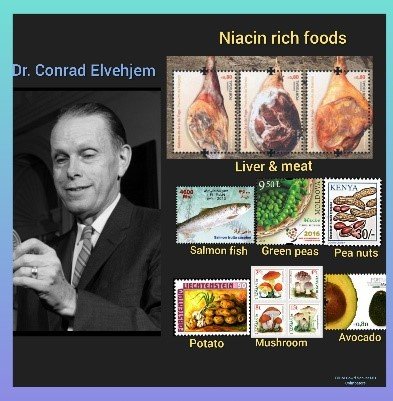 🔸Elvehjem was asked about his career preference at the age of 13. He chose the field of Biochemistry because he was interested in knowing the secret behind plant growth.

🔸His ultimate research was on nutrition, especially in trace elements and vitamins.

🔸Between 1908 -1940 there was an epidemic in the southern states of America, where 3 million people suffered from and 100,000 deaths occurred due to Pellagra. It was concluded as the most infectious and contagious disease of the time.

🔸In fact, Dr. Joseph Goldberger, a Clinical Epidemiologist solved the myth and mystery of Pellagra. His study concluded that it was a dietary disease. Since the people ate maize (corn) as a staple food, it lead to nutritional deficiency.

🔸The scientific community pursued the search for isolation of anti-pellagra factor across the world.

🔸In 1937, Dr. Elvehjem isolated & determined the structure of Nicotinic acid (NIACIN) from Liver extract. He found that Niacin was used to treat Black Tongue of a Dog, which is equivalent to Human Pellagra.

🔸Niacin is a Vitamin B3, also named as Pellagra Preventing Factor or Anti-Black Tongue Factor.

🔸In addition, Dr. Elvehjem published more than 800 research papers during his career on biochemistry and nutrition.

The Major Contributor in the Golden Era of Nutritional Research