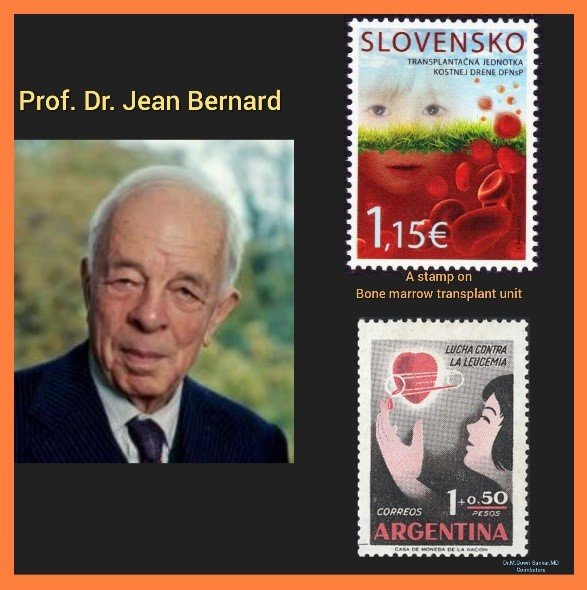 🔹Bernard studied medicine at Paris in 1926 and completed his laboratory training at the Pasteur Institute in 1929.

🔹He was professionally trained by Dr. Paul chevalier who was a leading haematologist in France during his period. He was the one who influenced him to become a haematologist.

🔹Then, Dr. Bernard became a Professor of Haematology and simultaneously he was also the Director of the Institute for leukaemia at the University of Paris.

🔹Initially, Dr. Bernard focussed his research on leukaemia. He was the first to describe the chemically induced leukaemia among industrial workers in 1950.

🔹He further demonstrated the toxic origin of leukaemia by injecting the chemical tar into the bone marrow of a rat and found that it caused leukaemia.

🔹By collaborating with Dr. Marcel Bessis, he developed Exchange Blood Transfusion as a therapy for childhood leukaemia.

🔹In 1962, Dr. Bernard successfully reached the high remission rate and did the first cure of Acute Promyelocytic Leukaemia by providing the drug called Daunorubicin.

🔹Moreover, he was the first to cure the Chronic Myeloid Leukaemia by using the drug Busulfan on a 3 years old child.

🔹By associating with Dr. Jean Pierre Soulier, he described the Bernard-Soulier syndrome upon testing on a boy with prolonged bleeding post tooth extraction. He was the first to recognise the Hereditary Bleeding Disorder.

🔹In addition, he published around 14 textbooks and monographs on Haematology.

🔹Apart from all the above, he was a creative writer, thinker and a man of poetry as well as literature. He published three volumes of Poetry and around 20 books on Medical Ethics and Philosophy.

The Pope of Haematology