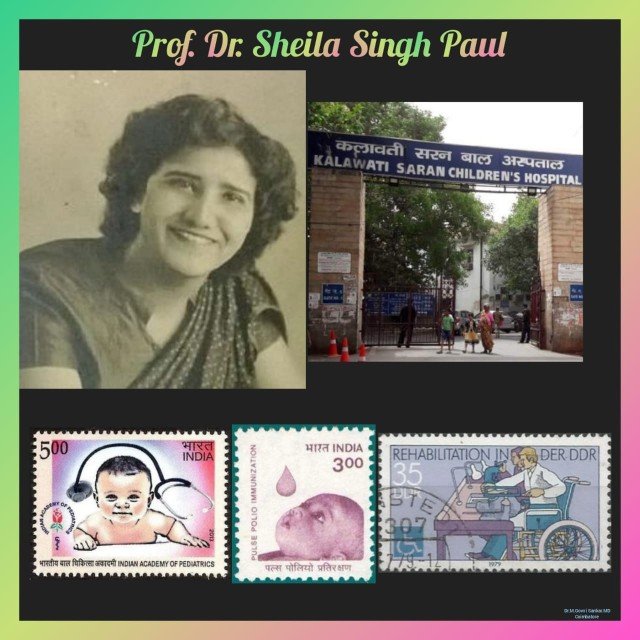 🔸Sheila was born to the Jewish descent parents, who owned coal mines in Jharkhand. She passionately studied medicine at Lady Hardinge Medical College, Delhi. After her studies, she served in the Indian Army Medical Corps.
🔸In fact, she was the First Women Pediatrician in India and a pioneer in the field of Pediatrics in India.
🔸Moreover, she founded Kalawati Saran Children’s Hospital in Delhi and became the Founder-Director at the age of 40 years. It was inaugurated on March 17, 1956 and is considered as one of the biggest children hospitals in Asia and is Delhi’s first independent child hospital.
🔸At that time, the incidence of polio started raising in India. In order to get rid of the disease, Dr. Sheila began her pioneer work in creating and promoting Polio vaccine campaigns.
🔸In addition, she started an exclusive Department of Physical Medicine and Rehabilitation and brought the specialists who trained in pediatric physiotherapy from Russia. This helped train the medical professionals of the Kalawati Saran Children’s Hospital to treat the children with deformities after polio.
🔸Furthermore, she served as a Professor of Pediatrics at Lady Hardinge Medical College. Also, she was one of the founding members of the Indian Pediatrics Society and the Indian Academy of Pediatrics.
🔸After her retirement from government service in 1974, she was given the post of Professor and Head of the Department of Pediatrics at Christian Medical College, Ludhiana. She served in that post till 1987.
🔸Also, she published many articles in the field of pediatrics.
🔸Eventually, she was felicitated and awarded numerous times by the Government of India, Russia and by the honorary members of Pediatrics in Russia for her meritorious work.
🔸Dr. Sheila Singh remained a missionary by serving villagers and the poor people, free of cost, till her last days. Throughout her service she used to say that “Tears of Gratitude” in the eyes of healed children’s parents were the most adequate compensation.