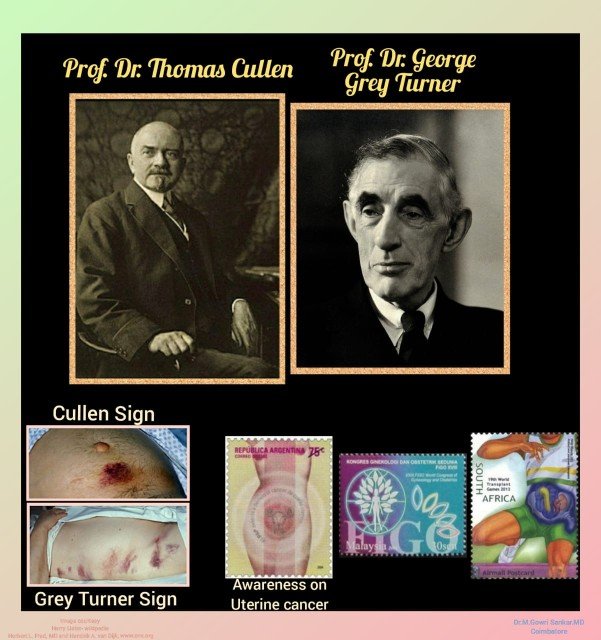 🔸Cullen was born in Ontario, Canada. He studied medicine at the University of Toronto.
🔸Then he came to Johns Hopkins, Baltimore in 1891 to study under Prof. William Welch in the pathology laboratory and did internship in gynecology with Prof. Howard Kelly.
🔸Thereafter, he played a pivotal role in the development of Gynecologic Pathological Laboratory in Johns Hopkins University.
🔸Moreover, he was the first in America to examine tissues removed in the operating room, using the microscope 🔬to make diagnosis.
🔸In fact, he was academically strong in the field of gynaecology and got promoted to Professor of Gynaecology.
🔸Simultaneously, he was doing his research on carcinoma uterus, endometrial hyperplasia, fibroid uterus and extrauterine pregnancy.
🔸His four monographs were extensively illustrated with drawings and photographs. They are:
🔅Cancer of the uterus (1900)
🔅Adenomyoma of the uterus (1908)
🔅Myomata of the uterus (1909)
🔅Disease of the umbilicus (1916)
🔸His Eponym…
🔅In 1918, Prof. Cullen was the first to describe CULLEN SIGN, a Peri-umbilical ecchymosis in a case of ruptured ectopic pregnancy.
🔸In the history of clinical medicine, Cullen sign is one of the principal physical examination signs. Cullen sign also appears in severe acute necrotizing pancreatitis along with Grey Turner sign (flank ecchymosis), which was firstly described by the British surgeon Prof. Dr. George Grey Turner (1877- 1955) in 1920.
🔸Both the signs are also seen in conditions causing intra-abdominal hemorrhage like splenic rupture, perforated ulcer, ruptured ectopic pregnancy and as a complication of anticoagulation drugs.