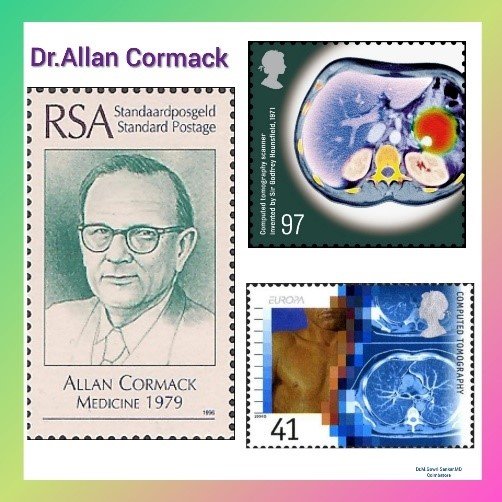 🔸Cormack studied Electrical engineering, Physics and Crystallography in the University of Cape Town, South Africa in the mid of 1940. Then he completed his Doctoral degree at the Cambridge University.

🔸In the year 1956, he got appointed as a Professor of Physics at Tufty University in United States.

🔸Actually, his primary research was with the fundamentals of particle physics. But simultaneously he showed a great interest in scientific research on X-Ray technology. This led him to develop a solid foundation of CT scan.

🔸Further, he published the base of CT scanning the ” Line Integral Function” in the Journal of Applied Physics in the year 1963 and 1964.

🔸Subsequently, he got an idea to take numerous X-rays at different angles of brain and body and compile the images in computer to represent in 3D dimensions. But unfortunately, he had no financial support to pursue his project.

🔸At that time, the British Engineer Godfrey Hounsfield came forward and assisted in turning Cormack’s theoretical idea into a practical device. Finally, the first prototype CT scanning was built successfully in 1971 in London.

🔸It was an epoch-making discovery in medical radiology and an enormous breakthrough in the field of medicine.

🔸In the year 1979, Cormack and Hounsfield were jointly awarded with Nobel Prize in Physiology and Medicine for the development of Computer-Assisted Tomography.

🔸In fact, both of them were not professionally trained in biology or medicine and did not work together. But their work united them in Nobel ceremony at Stockholm.

🔸 In 2008, the biography of Allan Cormack’s Life & Work – Imagining The Elephant – was published.

A Physicist Who Laid Foundation for CT Scan