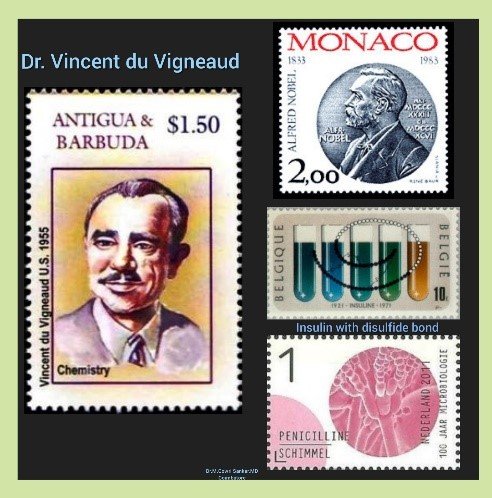 🔹Du Vigneaud was born in Chicago, United States. His father was an inventor and a machine designer.

🔹He was very enthusiastic about chemistry, so he pursued a degree in chemistry. Also, he successfully received his Ph.D. graduation for his work on “The Sulphur in Insulin” in 1926.

🔹After completion of his Post-Doctoral research, he gained vast experience by working in various reputed institutions.

🔹Then, he became a Professor and subsequently he was promoted to Head of Biochemistry position in Cornell University Medical College in 1938. He served at the University for nearly three decades.

🔹Throughout his life, he showed interest in chemistry, especially in Sulfur and Peptide compounds.

🔹His Significant works are…

🔅Synthesized Penicillin, when there was a great demand during second world war.

🔅He identified the disulfide bond in Insulin structure.

🔅He was the first it isolate and determine the structure of the sulfur containing vitamin Biotin.

🔅He was the first to derive homocysteine from methionine.

🔅Moreover, he contributed himself to the understanding of the metabolic reactions such as transmethylation and transulfuration.

🔅He also analysed the chemical structure of the two neurohormones of Posterior Pituitary gland – Oxytocin and Vasopressin and he was the First to Synthesize these two protein hormones.

🔹In fact, his seminal research on synthesis of two hormones created a Big Breakthrough in the field of Medicine.

🔹In the year 1955, he was honoured with the Nobel Prize in Chemistry for his profound investigation in hormones.

🔹The book “The Trial of Research in Sulphur Chemistry and Metabolism and Related fields” showed his devoted work on hormones.

🔹As a great teacher, he emphasized to his faculty – “Remember your first obligation is teaching, when you are teaching it takes precedence over research.”