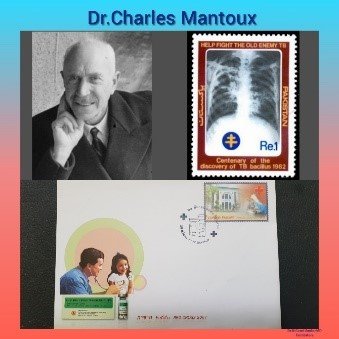 🔹After the discovery of tuberculosis bacillus, Dr. Robert Koch, in 1890, proposed that glycerine extract of tubercle bacilli called as Tuberculin could be used to cure and prevent. But his suggestion failed as a therapy.

🔹In this skin test, a drop of tuberculin was scratched into the surface of a small area of skin. The development of a red, raised area at the site of application called as Pirquet’s reaction indicates the presence of tuberculosis.

🔹Dr. Von Pirquet believed that this could be a perfect diagnostic test for tuberculosis.

🔹Then the role of Dr. Charles Mantoux commenced for upgrading Dr. Pirquet’s ideas and developing the Mantoux test.

🔹Mantoux graduated in medicine at the University of Paris in 1904. He was a disciple of Dr. Paul Broca, who is well known for his research on Broca’s area in Brain cortex.

🔹Unfortunately, Mantoux contracted tuberculosis when he was a student. After “tasted the taste of phthisis disease” he was forced to research the tuberculosis in sanatorium.

🔹Dr. Mantoux was not convinced with the results of Pirquet test, which causes scarification. Also, he had noticed negative results with few patients who suffered tuberculosis.

🔹Hence, he started his experimental studies in Guinea pigs to evaluate the hypersensitivity reactions to tuberculin. His studies guided him to develop a modified diagnostic method for screening the tuberculosis.

🔹This was the great starting point for the diagnosis of tuberculosis. He was credited for his marvellous discovery of Mantoux Test.

🔹Furthermore, he pioneered the use of Artificial Pneumothorax and investigated its effect on patients who suffered from TB cavities.