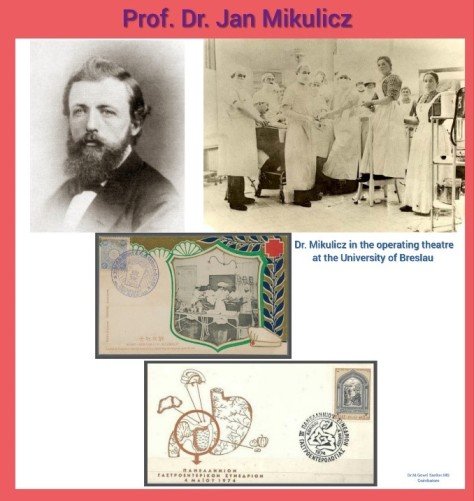 💠The Creator of Modern European Surgery

🔹Mikulicz graduated in Medicine from Vienna University in 1875 with the guidance of his mentor Dr. Theodor Billroth. After completion of his studies, he worked in his surgical clinic for years.

🔹In fact, he created innovative methods in operative techniques for a wide range of diseases and extended his support to develop Modern Surgery.

🔹He started his scientific research by describing Rhinoscleroma and labelling its unique cell as Mikulicz’s Cell.

🔹He was the first to suture a perforated gastric ulcer in 1885.

🔹Further, he was the first to treat the carcinoma oesophagus by doing resection and plastic reconstruction in 1886.

🔹Also, he obtained a new approach by lateral pharyngotomy for malignant tumour of tonsillar fossa in 1886.

🔹Subsequently, he introduced the Mikulicz-Block method, which was a two-stage resection for malignant tumor of colon.

🔹He was devoted to urological surgery and performed uretero-intestinal anastomosis and did the first ileocytoplasty to a patient with extrophy of bladder.

🔹In 1881, he constructed Esophagoscope and Gastroscope with distal illumination (by using Edison’s bulb), which was considered as the first successful and practicable scope.

🔹Moreover, he was a pioneer surgeon who adopted Sir Joseph Lister’s antiseptic method.

🔹Also, he was one of the first surgeons to use sterile silk gloves and suggested to change the gloves two or three times during surgery.

🔹He also insisted that the gauze mask to be worn during surgery and stressed the importance of avoiding unnecessary conversation at the operating table to prevent the contamination of operative field.

🔹He believed that the surgical efficacy is based on the right diagnosis and adapted his rules – “First, do not harm,” “The well-being of the patient is the most important.”

🔹Unfortunately, he succumbed to gastric cancer at the age of 55 years. Before his death he wrote: “I am dying without any regrets and with sense of satisfaction with my life. I worked according to my strength and I found happiness and recognition in the world.”

🔹To honour his work, the German Surgical Society gives the award named “Von Mikulicz-Kelly-Preis Award” for the best paper in the field of Endoscopy and Laparoscopy every year.

A King in the Kingdom of Surgeons