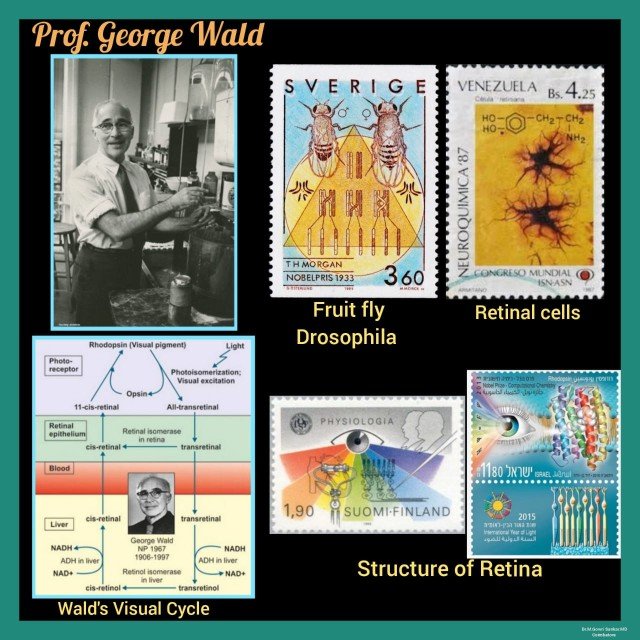 💠American Scientist
💠Discoverer of Vitamin A in Retina

🔹George Wald was born in New York City as the son of immigrant parents from Poland.
🔹During his young days, he used to read a novel called Arrowsmith, a story of a young man who entered medical school and become a successful physician, which inspired him a lot and pushed him into the research field.
🔹Wald studied Zoology at Columbia University, New York and received his Ph.D. in 1932.
🔹There he worked under Prof. Selig Hecht, one of the founders of biophysics and an expert in the physiology of vision. There he began his research on the vision of the Fruit fly Drosophila and started his deep study on dark adaptation in the human eye.
🔹Wald was actually obsessed with the question of “How vision worked at the molecular level?”
🔹In order to get an answer for this question, he traveled to Berlin in Germany to work in Otto Warburg’s laboratory. Dr. Otto was a German Physiologist, specialized in biologically active molecules, who had received the Nobel Prize for Medicine for discovering the respiratory enzyme.
🔹 In his laboratory, while using spectroscopy, Wald discovered that the retina contains vitamin A (Retinol) and retinal (vitamin A aldehyde) by his experimentation in frogs eyes.
🔹Afterwards, Wald returned to US due to an outbreak of Second World War. He then joined at Harvard University in Cambridge, where he worked for next 43 years. He became a Professor of Biochemistry in 1948.
🔹Simultaneously, he continued his investigation and discovered that when rhodopsin is exposed to sunlight it releases opsin protein and Vitamin-A containing compound. In fact, this discovery helped recognize the importance of the role of vitamin A in retina function.
🔹Furthermore, he demonstrated that retinal cones also related to vitamin A. Which is mainly responsible for color vision and in absence of these cells may leads to color blindness.
🔹Subsequently, he disclosed that color vision requires three pigments such as Erythrolabe, Chlorolabe, and Cyanolabe. He proved that color blindness of red colour is caused by the absence of erythrolabe, blindness to green is caused by the absence of chlorolabe and blindness to blue is caused by the absence of cyanolabe.
🔹His groundbreaking research earned him the most prestigious Nobel Prize in Physiology or Medicine in 1967 along with the researchers who had made great discoveries in visual processes – Dr. Ragnar Granit and Dr. Haldan Hartline.
🔹Moreover, he received many other prestigious awards including The Eli Lilly Award in Biological Chemistry, The Lasker Award from the American Public Health Association during his career.
🔹According to The Time Magazine release of 1966, Prof. Walt was listed as one of America’s 10 greatest college teachers.
🔹Actually, Prof. Wald’s long career of research on vision culminated in the discovery of how Vitamin A works in the retina and leading to the understanding of the chemical basis of vision.