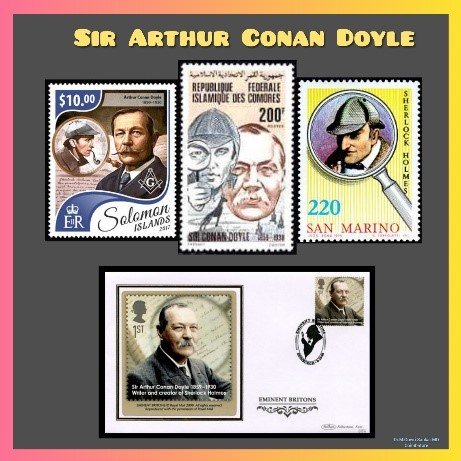 🔹Doyle was born in Scotland. His father was a drama artist and mother was a proficient reader and highly skilled in storytelling. Her great enthusiasm and animation were tuning Doyle’s mind day by day.

🔹When he turned nine, he was sent to a boarding school in England. There, he faced some difficulties but fortunately those made him realise his talent of storytelling. After some time, he used to be surrounded by young students who wanted to listen to his amazing stories.

🔹In fact, his family members expected him to study arts. But he joined in University of Edinburg’s Medical School and completed his MD in 1885. He also professionally trained in Ophthalmology in 1891 at Vienna.

🔹While Doyle was a medical student, he was highly inspired by his teacher Dr. Joseph Bell, who used to observe the minute detail regarding the patient’s condition. Actually, his teacher became the model for Doyle’s creation of the famous fictional detective Sherlock Holmes.

🔹After completion of his medical degree, he started his Ophthalmology practice. But he didn’t find a single patient knocking his door. This idle time fueled his fire of writing. Hence, he dedicated his time in writing stories.

🔹In 1887, he published his first novel “A Study of Scarlet,” wherein he introduced the widely popular character Detective Sherlock Holmes and his assistant Dr. Watson. His great literary success continued…

🔹He wrote around 60 episodes of Sherlock Holmes over the course of his writing career.

🔹Also, Dr. Doyle made a significant shift in writing science fiction through the adventure story – The Lost World. It is a novel about a professor’s journey to the Amazon forest, where he discovered dinosours and other prehistoric animals.

🔹During 1900’s, when Boer War started amongst the British Empire and the two independent Boer states of South Africa, Dr. Doyle volunteered himself as a medical doctor and sailed to Africa. Unfortunately, he lost his son, brother and two of his nephews in the war.

🔹To conclude about the war, he wrote “The Great Boer War” – a 500 page chronicle. That was considered the Masterpiece of Military Scholarship.

🔹His words as Sherlock Holmes said to Dr. Watson: “Work is the Best Antidote to Sorrow.”

The Creator of the Most Famous Detective of All Time