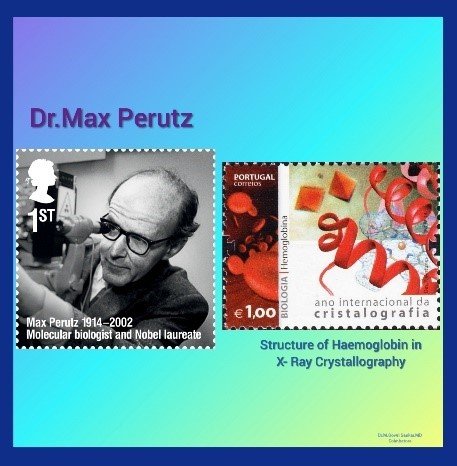 🔸Max Perutz was born in Vienna to a family of textile manufacturers. His discerning teacher in school aroused his interest in chemistry.

🔸He pursued an opportunity to work with his mentor J. D. Bernal, who pioneered the use of X-ray crystallography in Molecular Biology.

🔸Dr. Perutz began his research by taking X-Ray diffraction pictures of haemoglobin crystals and worked with the powerful tool of X-Ray crystallography. By this technique, he studied about haemoglobin of various species.

🔸After consistent hard work of 20 years, he identified the Molecular Structure of Haemoglobin, which is constructed with 4 Polypeptide chain that form a tetrameric structure with 4 heme groups with central Iron atom.

🔸Further, he demonstrated the switching of deoxygenated and oxygenated haemoglobin.

🔸Finally, he was awarded with shared Nobel Prize in Chemistry with John Kendrew in 1962 for the contribution in X-ray diffraction analysis of the structure of globular proteins.

🔸In addition, he founded and served as chairman of “Medical Research Council Laboratory of Molecular Biology” in Cambridge that eventually produced 14 Nobel Laureates.

🔸He further showed interest in the crystalline properties of glaciers (Glaciology). By crystallographic study, he demonstrated the transformation of Snow into Glacier.

🔸He was also a versatile writer who wrote with wonderful clarity, simplicity and covered a various range of topics.

🔸In conclusion, he declared that In Science, Truth Always Wins.

A Scientist Who Unravelled the Atomic Mechanism of Haemoglobin