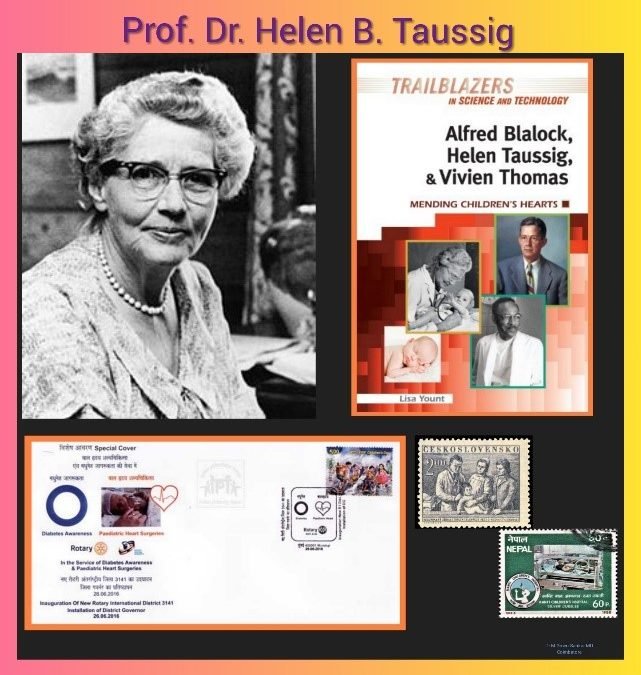 🔹Taussig was born in Cambridge. Her father was a well-known Economist and Professor of Harvard University. Unfortunately, she lost her mother at her age of 11 years due to tuberculosis.

🔹During her childhood, she faced many health issues such as contracted TB – she suffered for a long period and had middle ear infection, which rendered her half deaf. Apart from this, she suffered from severe dyslexia.

🔹However, her father and grandfather, who was a teacher in blind school, encouraged her to become a doctor.

🔹Hence she studied part of Medicine at Harvard Medical School and in Boston University. But due to gender discrimination, she was not allowed to graduate.

🔹So she got transferred to Johns Hopkins University School of Medicine, where she pursued her interest in Cardiac Research.

🔹At the age of 32 years, her deafness worsened, so, she relied on lip reading techniques and hearing aids to interact with patients.

🔹She eventually “Learned to Listen” the heart sounds and murmurs with her hands by gently placing her fingers on a heart.

🔹But she never allowed these obstacles to stop her from moving forward. She established “One of the First Paediatric Cardiology Clinics” at Johns Hopkins University School of Medicine, Baltimore.

🔹She also pioneered in using X-rays and Fluoroscopy to identify the Congenital Heart Defects in new-born.

🔹During 1950, there was a sudden epidemic across Europe – new born children having limb defects – Phacomelia. Dr. Taussig voluntarily went to Germany to help in research to find underlying cause.

🔹Subsequently, she helped in establishing the teratogenic effects of Thalidomide, a drug which is used to treat motion sickness in pregnancy. As a result of her effort, thalidomide was banned.

🔹Moreover in 1947, she published a book by summarizing years of her clinical experience in “Congenital Malformation of the Heart,” which is considered the foundational text book of paediatric cardiology.

The Mother of Paediatric Cardiology