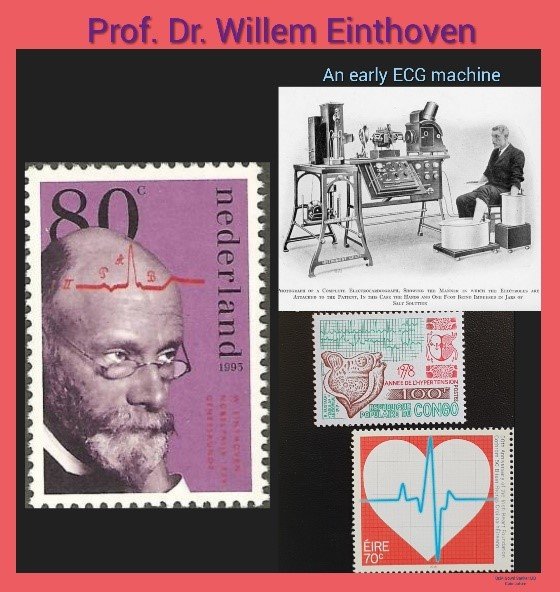 🔸Einthoven was born to Dutch parents at an Island of Java. His father was an army medical officer. Unfortunately, Einthoven lost his father at the young age of 6. Hence, his mother decided to return to native Holland.

🔸In 1878, he entered into University of Utrecht, Holland for his medical studies. He wished to follow his father’s footsteps and completed his graduation in 1885. He was appointed as a faculty the same year at Leiden. He worked there until his death.

🔸In the early days of his career, he worked with both Dr. Snellen, an Ophthalmologist and Dr. F.C. Donders, a Great Physiologist.

🔸On one particular day, Dr. A.D. Waller, the British Physiologist, was demonstrating the human electrogram by using Lipmann’s capillary electrometer. This aroused Einthoven’s interest in the electrophysiology of the heart.

🔸As he found some restrictions in the above device, he intensified his research and found a device called String Galvanometer, which was labelled as Einthoven’s Galvanometer in 1903.

🔸In addition, he coined the term Electrokardiogram (EKG) and developed 3 limb leads with assigned letters P, Q, R, S and T to differentiate the deflections and Einthoven’s Triangle.

🔸During the years 1908 – 1913, he was studying the recognition and interpreting the deviations of ECG. He was the first to demonstrate the clinical use of the ECG, which had opened a new way of understanding the cardiac diseases.

🔸Eventually, he was honoured with the Nobel Prize in Medicine in 1924 for his discovery of the mechanism of Electrocardiogram.

The Greatest Benefactor of Mankind