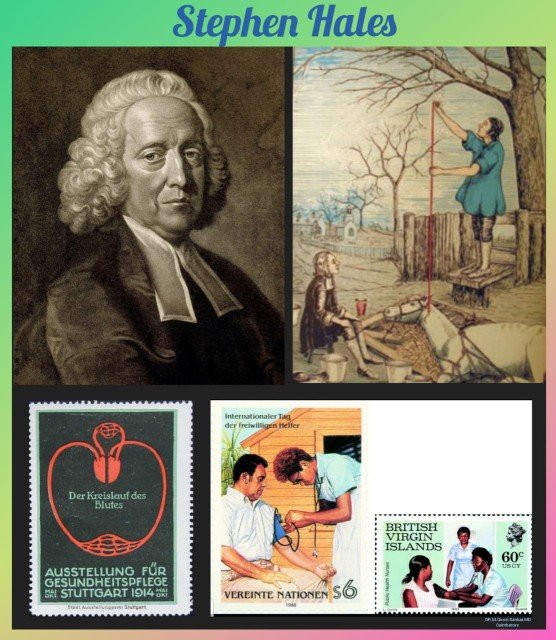 🔹Hales was a student of Bene’t (now Corpus Christi) College, University of Cambridge. He studied theology and was also interested in the fields of Astronomy, Physics, Chemistry as well as Biology.
🔹In his early career, he got interested in medicine due to his physician friend William Stukeley at Cambridge. Along with him, he dissected animals and observed the experiments conducted in the laboratory of Sir Isaac Newton.
🔹In turn, Hales investigated and introduced the new techniques of measurement to the study of Plant Physiology.
🔹One of the best-known of these were the measurement of water vapour emitted by plants. He measured his emission – known as transpiration, thereby he investigated plant respiration. This unique work has earned him the title – “Father of Plant Physiology.”
🔹Furthermore, Hales was the the first to quantitatively measure force of the blood (blood pressure).
🔹In Animal Physiology, he took the most important step after William Harvey and Marcello Malpighi in elucidating the Physiology of the Circulation.
🔹In 1733, he carried out his catheterization by using living horse as a subject – through invasive method he measured the blood pressure by inserting fine tubes into carotid artery and measured the rise in a column of blood in a glass tube (9 feet 6 inches in height) and then it gradually fell.
🔹Thus he proved that the amount of pressure generated by heart could be measured through the displacement of blood.
🔹Subsequently, Hales took wax casts of the ventricle of the animal heart and estimated how much blood was pumped by the heart. He also described the role of the mitral valve and aortic valve during systole and diastole.
🔹He also made significant contributions to respiratory physiology through the invention of his prototype ventilator.
🔹In addition, he developed a double lumen bladder catheter and devised special forceps for the removal of urinary stones.
🔹 Moreover, he published his first description of transpiration in a book called “Vegetable staticks” in 1727. His series of experiments on animals were described in “Haemastaticks” in 1733. He further published “A Description of Ventilators” in 1743 and  “A Treatise of Ventilators” in 1758.
🔹Basically, Hales was a natural philosopher and a clergyman, but not a scientist by profession. However, his interest in science led him to create wonders in the field of medicine.