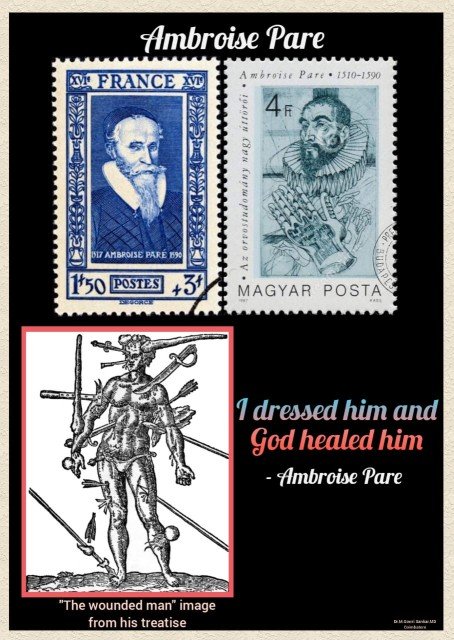 🔹Ambroise Pare was born in a poor barber family in rural part of France.
🔹In those days, till 17th century, surgery was merely one of the specialisations of barber’s profession.
🔹Pare started his surgical training as an apprentice to a barber-surgeon at 15 years of age and got trained in Hospital Dieu, Paris.
🔹As he was unable to afford the exams conducted for the barber-surgeon profession, he enlisted himself in the army and served in many military campaigns in European continent.
🔹Later, he became the first army surgeon and eventually the greatest surgeon of his day in France.
🔹Subsequently, he became the head of the Royal College of Surgeons in 1567 and was promoted to be the surgeon to four successive kings of France.
🔹During 16th century, many anatomical discoveries were made by anatomists such as Vesalius, Fallopius, Eustachius, etc. Pare got inspired by this and went on to acquire an outstanding knowledge in anatomy. He ultimately applied this in his surgical practice.
🔹In those days, most of the surgeons in the war field had treated gunshot wounds with boiling oil and stopped bleeding by cauterising the arteries (without anaesthetic).
🔹Whereas, Pare had used soothing ointment such as egg yolk, oil of roses and turpentine for war wounds. He also reintroduced the ligature of arteries (next to Galen) instead of cauterization during amputation and tied off the arteries to stop bleeding.
🔹By his new techniques, he revolutionized the treatment and care of trauma wounds and earned the nickname “The Gentle Surgeon.”
🔹Apart from his many surgical inventions and dental instruments, he also devised artificial limbs and facial prosthesis like artificial noses held on with strings and artificial eyes. It is no wonder that he is considered the Father of Modern Surgery.
🔹Further, he improved the podolic version of obstetrical maneuver to save the life of fetus and practiced to treat the illness of children, three centuries before the birth of the term “Paediatrics.”
🔹Besides, he was a phenomenal writer, who published many books such as….
🔅A Treatise on Gunshot Wounds (1545)
🔅An Essay on Podalic Version (1550)
🔅A Treatise on Surgery (1564).
🔹Moreover, he wrote French summaries of the works of the founder of modern human anatomy – Andreus Vesalius.
🔹More than a surgeon, he was a great humanitarian who treated the poor like kings. He also believed in the spiritual dimension – this reflected from his most famous aporism engraved in his text book… “I dressed him and God healed him.”
🔹During his lifetime, Pare made significant contributions to the field of surgery, orthopedics, military medicine, obstetrics, pediatrics and dentistry. In fact, his surgical practice and writings have been significantly influential even after his death.

The Greatest Medieval Surgeon of the 16th Century