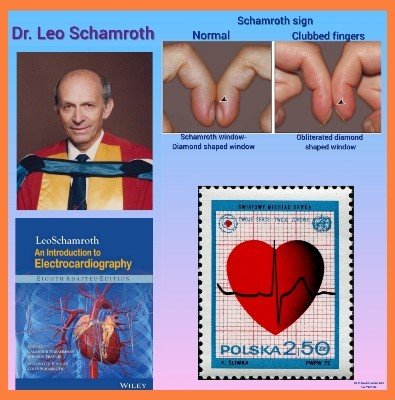 🔹Schamroth was born in Belgium. When he was 5 years old, his family emigrated to South Africa.

🔹In 1948, he completed his medical graduation from WitsMed University, Johannesburg.

🔹Unfortunately, he suffered from Rheumatic heart disease and developed Infective endocarditis. He used that opportunity to observe his fingers and then described a simple sign to confirm the presence of clubbing in fingers, which is known as Schamroth’s Window Test.

🔹Also, he was a devoted teacher who often demonstrated extraordinary clarity and showmanship. He also did an extensive research in the field of electrocardiography.

🔹In addition, he published around 300 scientific papers and 8 text books. Those are mainly concerned with electrocardiography.

🔹His foremost contribution was “An Introduction to Electrocardiography,” published in 1957 – which had up to 8 editions. This was the most commonly stolen book in the medical libraries all over the world.

🔹In fact, his academic achievements, awards and honours were numerous. He was awarded with Master Teacher Award by the American College of Cardiology in 1972.

The Giant in the Field of Electrocardiography