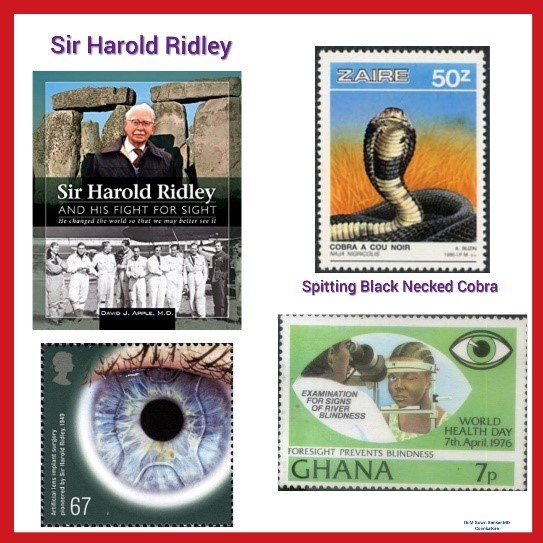 🔸During the second world war, he got appointed in Royal Army Medical Corps in Africa, where he did his research on River Blindness.

🔸He further recorded his observations about Retinal fundus in watercolour paints and named the photographs as “Ridley Fundus of Onchocerciasis“.

🔸In 1944, he published his case report Snake Venom Ophthalmia in British Journal of Ophthalmology. This was his briefing about his treatment of eye to the people spitted by venom of Spitting Black-necked Cobra.

🔸On the same year, he was moved to Rangoon, Burma where he studied and treated around 200 prisoners of war who were suffering from Nutritional Amblyopia. He successfully treated them by using multivitamins.

🔸During the Second World War, many Pilots from Royal Air Force came with Eye injuries. He found that the splinters of Acrylic plastic from Aircraft Cockpit had lodged in their eyes, and revealed that this acrylic plastic did not cause inflammation in eyes of injured Pilots.

🔸In fact, this revelation led him to propose the use of artificial lens by using Acrylic material to treat cataract.

🔸On November 29, 1949 at St Thomas Hospital, he successfully accomplished the First Implant of Intraocular Lens. That was the beginning of New Era in the field of Ophthalmology.

🔸Moreover, he pioneered the treatment of cataract surgery, also worked hard to overcome the complications and refined his techniques in late 1960.

🔸Finally in 1981, US-FDA approved the Intraocular lens as “Safe and Effective.”

🔸In 1990, he underwent Bilateral Intraocular Lens Implantation at St Thomas Hospital. He benefited from his own inventions and his operative procedure and had the surgery in his alma mater.

The Physician Who Changed the Sight of the World