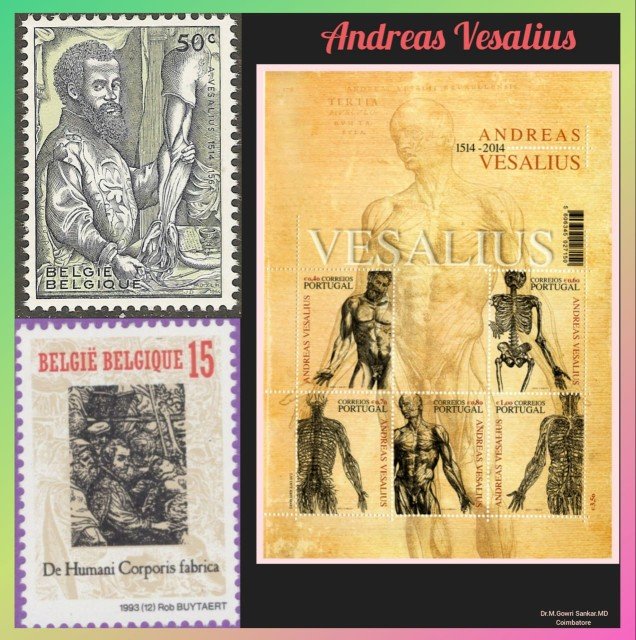 🔸Vesalius was born in a physicians’ family in Belgium. His grandfather and father served physicians to the Emperors.
🔸He was also interested in continuing his family tradition, hence he took support from his father. Before he learned medicine, he learned Greek and Latin.
🔸Initially, he studied medicine at the University of Paris, where he learned the theories of Galen and to dissect animals. Simultaneously, he spent time in Paris cemetery and studied about human bones.
🔸Due to political turmoil, he left Paris and completed his studies at the University of Leuven.
🔸After his studies, he got appointed as a chair of surgery and anatomy at the University of Padua, Italy, which was considered the most famous gymnasium in the world. There, he started dissecting human cadavers and provided a clear understanding of human anatomy.
🔸By his meticulous human dissections, he corrected age-old anatomical misconceptions and some of Galen’s assertions, which was followed for 1400 years.
🔸During the year 1543, he conducted a public dissection of the body and donated the skeleton set to the University of Basel, which is still in display at the Anatomical Museum of the University of Basel.
🔸Before his entry, anatomy was taught without images. Based on his own dissections of cadavers, he published his first anatomical text, Tabulae Anatomicae Sex, in 1538 followed by De Humani Corporis Fabrica (“On the Structure of the Human Body”), commonly known as the Fabrica, in 1543.
🔸Fabrica was the first comprehensive textbook of human anatomy with 273 illustrations and became an important reference book for subsequent generations.
🔸Later, he spent few years in Spain along with his family. There, he served as a physician to the Emperor.
🔸While he was returning from the pilgrimage to Jerusalem, his ship wrecked on one of the islands of Greece, where he became ill and unfortunately died at the age of 49 years.
🔸His contemporaries and successors in the University of Padua were Hieronymus Fabricius (first to describe veins have valves) Gabriello Fallopius, Realdo colombo, Bartolomeo Eustachio and William Harvey.
🔸Undoubtedly, Andreas Vesalius revolutionized the practice of medicine by his accurate and detailed descriptions of the anatomy of the human body and introduced the human dissections into medical curriculum.
🔸In the Preface of his book Fabrica, he stated – “the wonderful knowledge of the human body attests the wisdom of the immense creator.”

A Renaissance Figure of the 16th Century Scientific Revolution