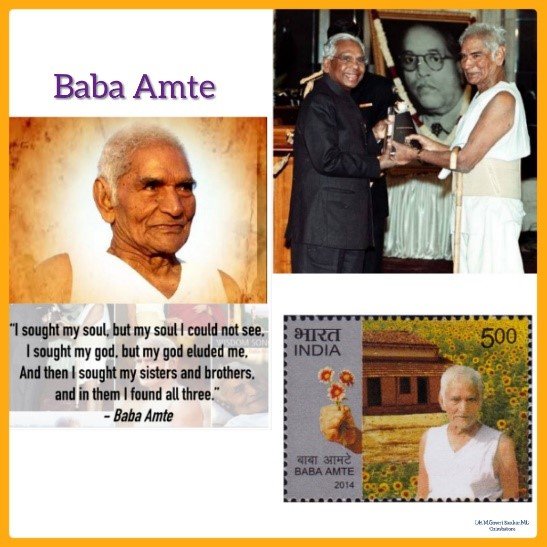 🔸In fact, Amte was a born in wealthy family, his father was a powerful bureaucrat of British administration and a landowner. However, Amte understood the sufferings of the poor at a very young age.

🔸Actually, Amte aimed to become a doctor but his father forced him to study law.

🔸Amte was happily enjoying his luxurious life during his early stage by spending the days in horse riding, hunting, playing tennis and driving sports car. His sports car was well designed by panther skin seat cover, which was shot by him.

🔸He graduated in law in 1936 and then he started his legal practice. But soon he started getting influenced by the words and philosophy of Mahatma Gandhi. As a result, Amte joined in freedom movement of our nation.

🔸Consequently, Amte served the nation as a defense lawyer, appearing for those who imprisoned for participating in Mahatma Gandhi’s Quit India campaign against the British.

🔸Thereafter, Amte abandoned his law career and settled in Gandhi’s ashram at Sevagram, Maharashtra in the year 1940. As a disciple of Gandhi ji, Amte followed his foot steps towards the betterment of people afflicted with leprosy.

🔸In order to gain the scientific knowledge on leprosy disease, Amte studied a course on leprosy at the Calcutta School of Tropical Medicine and also worked in a leprosy clinic.

🔸Later, he founded Maharogi Sewa Samiti, (Leprosy Service Society) with the intention of treating leprosy patients. He also inaugurated “Anandwan” (Garden of Joy) ashram – dedicated to the treatment, rehabilitation, and the empowerment of leprosy patients.

🔸In fact, Anandwan ashram was started in 1949 under a tree, but today it has grown to 450 acre campus. It has two hospitals, one university, an orphanage and a school for the blind and the deaf.

🔸Indeed, Baba Amte’s social work was highly supported by his wife Sadhana Amte who was also a strong believer of humanity. Their two sons are Dr. Prakash Amte and Dr. Vikas Amte and daughters-in-law, Dr. Mandakini and Dr. Bharati, who are Physicians, dedicated their life and continue the philanthropic works of Baba Amte.

🔸Eventually, the relentless work of Amte was accoladed worldwide in the form of many prestigious awards, notably…

🔸Baba Amte has been hailed as the last of the true followers of Gandhi’s philosophy. Though he was born rich, he led a spartan life by wearing only khadi clothes. Let us also salute and acknowledge Baba Amte for his lifetime dedication and service to humanity.

The Creator of Better India