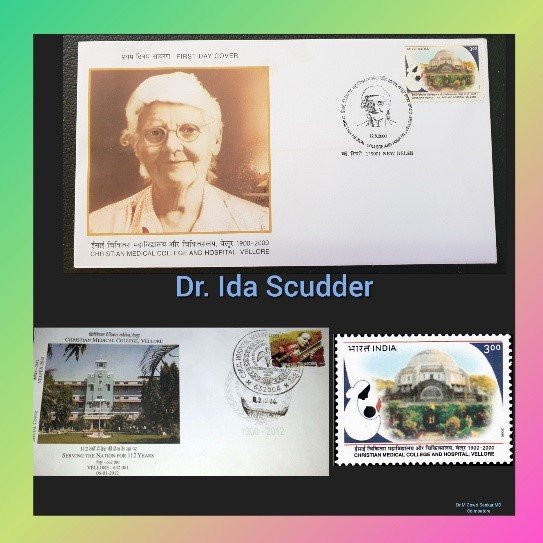 🔸Ida was born in Ranipet, India. She was a granddaughter of the first American Medical Missionary. Her father was a well-trained Physician and had a medical mission set-up at Vellore, Tamil Nadu, India.

🔸In the year 1894, before she had decided to study medicine, she received three calls. On one particular night, she witnessed three young women die during childbirth because there was no woman doctor for treatment.

🔸The Three Knocks in the Night opened her eyes and she committed to providing medical education for Indian women and fighting against the epidemics of bubonic plague, cholera and leprosy.

🔸Hence, she sailed to United States and completed her MD at Cornell University in 1899 and returned to India with the gift of $10,000 from Manhattan Bank.

🔸Unfortunately her father died within few months of her arrival. But she started her service by taking her mother as an assistant. Initially she had setup a small hospital in 1902. She was the only Physician active until next 22 years.

🔸By travelling in bullock cart, she visited many places and established roadside dispensary service to treat patients and educated the people who could not reach Vellore.

🔸She further started a program at her hospital to educate the women about health. Subsequently this was expanded as India’s First Graduate School of Nursing in 1909.

🔸She had raised funds and attained her goal by Founding Medical School for Women in 1918 and later it became one of Asia’s foremost teaching hospital – Christian Medical College, Vellore.

🔸Some Milestones of the Institution…

🔅 First leprosy reconstructive surgery in the world in 1948.

🔅 First rehabilitation institute in India in 1966.

🔸Since she was popular in India, once a letter reached her with just mentioning her name – Dr. Ida, India.

🔸She served India during her time in ways Mother Teresa would do three decades later.

The Physician Who Changed the Face of Medicine