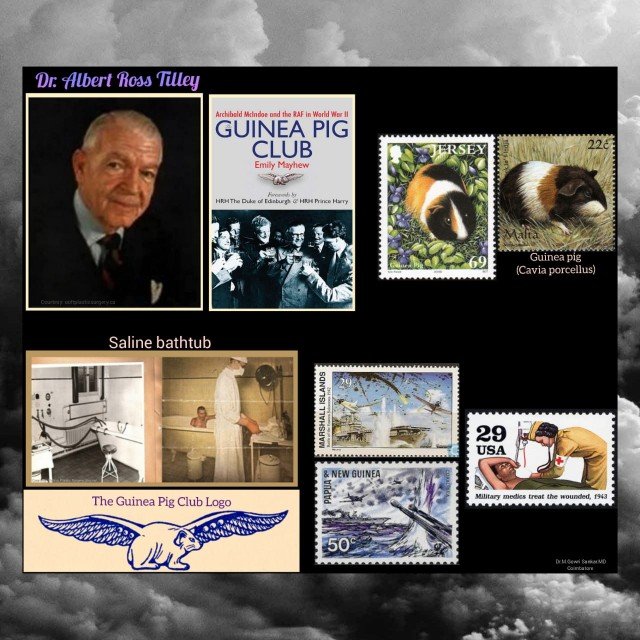 🔹Tilley was born in Canada. He did his medical studies at the University of Toronto and graduated in 1929.
🔹Subsequent to his medical studies, he travelled extensively for five years and studied surgery at different places such as the Toronto Western Hospital, The Roosevelt and Bellevue Hospitals in New York and then in The Royal Infirmary of Edinburgh in Scotland.
🔹During the Second World War, he got appointed as a Medical Officer in Squadron of the Royal Canadian Air Force at London with the rank of Captain.
🔹There Dr. Tilley received a life changing invitation to join work with Sir Archibald McIndoe, a plastic surgeon in Royal Air Force / Queens Victoria Hospital at East Grinstead (UK).
🔹Subsequently, they together pioneered in treating hundreds of young pilots who were heavily injured in a plane crash 🛩 with deep burns and facial disfigurements in war.
🔹Thereby, they became well known for their innovations in burn management.
🔹Actually, they had done so by applying a single layer of tulle gras on the surface of the wound. They further developed Saline Bath method of soaking wound for hours in bathtub which was filled with saline, for two to three times per day to facilitate viable graft surface. To combat wound infections, sulphanamide dusting (sprinkled) over the surfaces of burns.
🔹Further, they successfully pioneered new techniques in Skin Grafting and also established nose replacement, eyelid reform, chin and cheek bone reconstruction and recreating injured fingers of burn victims.
🔹Furthermore, they implemented the psychological rehabilitation & social integration to bring the victims back into normal life.
🔹Moreover, Dr. McIndoe had formally initiated a rehabilitation camp for treated victims – known affectionately as The Guinea Pig Club. The victims were called as Guinea pigs because most of the surgical techniques had done on them were entirely new and experimental.
🔹In fact, among the 649 members of the club, 176 Canadian Guinea Pig victims were under the care of Dr. Tilley, who also served as president of the Canadian branch of Guinea Pig Club.
🔹Dr. Tilley worked tirelessly with Dr. McIndoe and ultimately saved the hands, faces and livelihoods of hundreds of young injured men. Both were considered a Father-figure in the sight of Guinea Pig club survivors.
🔹In order to honour Dr.Tilley’s commitment, the Guinea Pig Club survivors funded a bronze bust, which was installed in the Canadian wing of the Queen Victoria Hospital.
🔹Later, he became one of the founding fathers of the Canadian Society of Plastic Surgeons in 1947. He also, served as the founder and director of the first adult burn centre in Canada.
🔹Finally in the year 2006, Dr. Tilley was inducted into Canada’s Aviation Hall of Fame for his distinguished skills, radical new medical techniques, and his total devotion to the treatment of airmen’s burns and reconstruction of deformities.

A Maverick Surgeon with Tender Hand