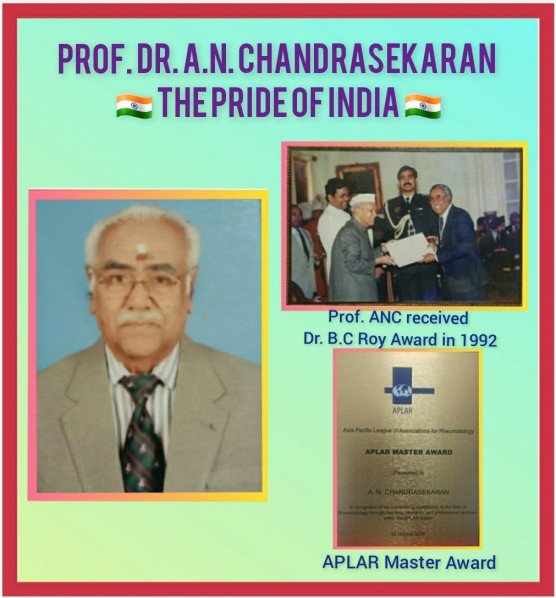 💠Father of Rheumatology in India

🔸Prof. Dr. A. N. Chandrasekaran fondly called Prof. ANC, was born in a small town called Ramaiahpet in Telangana at his maternal grandfather’s house. However, he was brought up at the holy temple town of Kanchipuram in Tamil Nadu. There, his father served as an Honorary Special Magistrate in the Judiciary.

🔸He joined to study medicine at Madras Medical College, Chennai in 1957 and completed his medical graduation in 1962.

🔸During the India-China war in 1962, India was facing a national emergency. He volunteered to serve the nation and joined the Indian Army Medical Corps.

🔸After his training at Lucknow, he was posted to 3/8 Gorkha Rifles as a Regimental Medical Officer. After the end of Indo- China war, he involved himself in Indo-Pakistan war, where he travelled throughout Jammu & Kashmir with the troops and served in the war field for four and a half years.

🔸His meritorious medical service in the war field was well recognized and honored with three medals:

🔸He then did his MD in General Medicine at MMC, Chennai, and completed it in the year 1970.

🔸Upon his return to India, he joined his Alma mater Madras Medical College and Government General Hospital in Chennai.

🔸In fact, he started an exclusive Department of Rheumatology at the institution in 1972.

🔸Subsequently, the department was upgraded into a full-fledged center of excellence with teaching, research, and patient care facilities (with 30 beds).

🔸During that time, the Department of Rheumatology at MMC was the first of its kind in the entire nation to function under an independent Professor of Rheumatology – under Prof. Dr. A. N. Chandrasekaran – while in the rest of the country the rheumatology services were under the control of Professor of Medicine.

🔸Further in the year 1991, Prof. ANC started the DM Rheumatology course for the first time in India and also he was the first to start a Ph.D. Program in Rheumatology at MMC.

🔸He was the first in India to lead the World Health Organisation (WHO) & the Indian Council of Medical Research (ICMR) collaborated research activities in the field of Rheumatology in India. Also, he successfully conducted more than 20 International drug trials at MMC.

🔸During this time span, he has published more than 300 scientific papers in reputed Indian and International journals and delivered many lectures in various towns of India to create awareness of Rheumatological diseases for both the medical fraternity and the public.

🔸Moreover, Prof. ANC is a teacher par excellence, who has trained a large number of doctors from various states of India.

🔸His incessant service in the field of Rheumatology has brought him many laurels and he is popularly referred as the Father of Rheumatology in India. He has been honored with various awards including:

🔅 “APLAR Master Award” by Asia Pacific League of Association for Rheumatology in 2020.

🔸Prof. ANC has been conferred with many Fellowships from reputed institutions and societies including:

🔅Fellow of American College of Chest Physicians (FCCP) in 1976.

🔅Fellow of the Indian Association of Medical specialties (FIAMS) in 1990.

🔅Fellow of Royal College of Physicians (FRCP) Edinburgh in 1994.

🔅Fellow of the Indian College of Physicians (FICP) in 1994.

🔅Fellow of American College of Rheumatology (FACR) in 1995.

🔸After his retirement in 1996, he continued his yeoman social work by sparing his time, energy, and funds.

🔸He actually adopted a village named ‘Arungundram’ in the Vellore district of Tamil Nadu to remove the ailments of the village. He initiated a Public Charitable Trust and rendered many public services with the support of his family members, friends, and philanthropist. Some of them are:

🔅Provided free medical treatment for all the villagers.

🔸Moreover, he showed great interest in researching and conserving Indian cultural monuments. So far, he has dug out many statues of ancient Pallava and Chola periods and renovated more than 18 ancient temples in the Vellore district, Tamil Nadu.

🔸To honor his extraordinary service, he has been awarded the REACH (Rural Education and Conservation of Heritage Foundation) Award by the Academy of Archaeology and Sciences of Ancient India (AASAI), a non-profit organization dedicated to the preservation and education of Indian heritage.

A Dedicated Physician & A Philanthropist

A Proud Son of Mother India