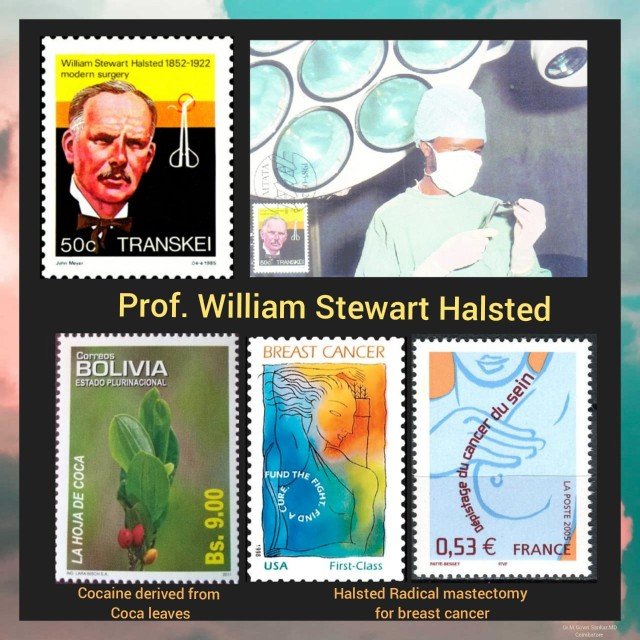 🔸Halsted was born in a wealthy business family. He did his medical studies at Yale Medical School and graduated in 1874. Then he completed his internship at New York College of Physicians and Surgeons.
🔸While doing his internship, he implemented his new idea called “Patient chart.” It’s a system used to monitor patient’s respiration, temperature and pulse.
🔸Subsequently, he noticed the unsanitary conditions of bleeding patients and buckets full of pus. Therefore, he initiated the anti-septic technique of Sir Joseph Lister. Then he successfully completed his internship and received his MD graduation in the year 1877.
🔸Thereafter, Dr. Halsted went on a study trip to Europe and learn surgery under several prominent surgeons such as Bassini, Ernst von Bergmann, Theodor Billroth, Emil Zuckerkandl.
🔸Once he read an article regarding the anesthetic potential of cocaine solution on cornea and conjunctiva of the eye. This influenced him to inject cocaine into the nerve trunks and thereby he developed the “Block anesthesia.”
🔸Also, he was one of the big four founding professors of Johns Hopkins Hospital, Baltimore:
🔅 Prof. William Halsted – Surgeon.
🔅 Prof. Sir William Osler – Physician.
🔅 Prof. William Welch – Pathologist.
🔅 Prof. Howard Kelly – Gynecologist.
🔸Moreover, he was recognized as the first chief of surgery in Johns Hopkins. He was the first to introduced the “Residency Training System” for surgeons in the United States.
🔸Prof. Halsted was one of the first to start the practice of surgery with sterile rubber gloves, caps, masks and gowns.
🔸Furthermore, he pioneered a wide range of surgeries such as biliary tract operations, breast surgery etc. He further introduced the plate and buried screw technique for long bone fractures.
🔸His Eponyms….
🔅 Halsted’s operation I – Inguinal hernia surgery.
🔅 Halsted’s operation II – Radical mastectomy for breast cancer.
🔅 Halsted’s node – Subclavicular nodes.
🔅 Halsted’s sign – Ecchymotic spots in the abdomen especially in periumbilical in acute necro hemorrhagic pancreatitis.
🔅 Halsted’s suture – A mattress suture for wounds that produced less scarring.
🔅 Halsted mosquito forceps – A type of hemostat.
🔸Thus, the extraordinary skills of Prof. Halsted as both a surgeon and an innovator transformed the surgery from a horrific and dangerous practice to what we know as a life-saving art today.