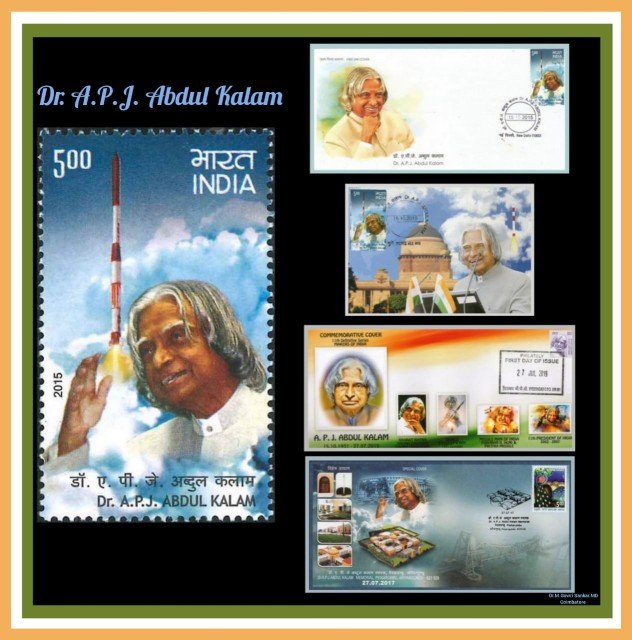 🔸Kalam was born in a small village at Rameshwaram, Tamilnadu.
🔸In his school days, he was a brilliant & hardworking student and had a strong desire to learn more. He graduated in physics and specialized in Aerospace Engineering at Madras Institute of Technology.
🔸Thereafter, he spent his next four decades as a scientist at the Defence Research and Development Organization (DRDO) and Indian Space Research Organization (ISRO). In ISRO, he was the Project Director of India’s first Satellite Launch Vehicle (SLV-III), which deployed the Rohini satellite in earth’s orbit in 1980.
🔸His enormous contributions to the development of Ballistic Missiles like Agni and Prithvi made him the Missile Man of India. He also played a pivotal role in India’s first Nuclear test (conducted in 1974) and Pokhran-II (conducted in 1998). This established him as a national hero.
🔸Furthermore, he was elected as a 11th President of India in 2002, and was widely called as “People’s President.”
🔸He also emphasised the application of science and technology for the benefit of common man. His contributions to the Indian Healthcare Sector were tremendous.
🔸 He further collaborated with prominent cardiologist Dr. B. Soma Raju and together they developed a low-cost coronary stent called as Kalam-Raju Stent. They also designed a Tablet Computer, named Kalam-Raju Tablet for health care in rural areas.
🔸Subsequently, Kalam and his team toiled endlessly and had been instrumental in using carbon-carbon and carbon-polymer materials (light weighted material which are used in missiles) to produce Orthosis Calipers for polio affected children with motor disabilities. His lightweight calipers benefited over 50,000 children and enabled them to walk with less pain and more freely without much help.
🔸Moreover, Dr. Kalam was honoured by about 40 doctorates from universities. He was also awarded with Padma Bhusan, Padma Vibushan and India’s most prestigious civilian award Bharat Ratna.
🔸In modern Indian history, Dr. Kalam has been celebrated as a scientist, teacher, statesman and moreover a great human being. In spite of his achievements he wanted to be remembered as a “Teacher.”
🔸Although the vacant space of Dr. Kalam can never be filled, his words of immense wisdom will be with us forever and inspire us to add value to the world.

A Day to Commemorate on his Birthday….

A Man of Masses