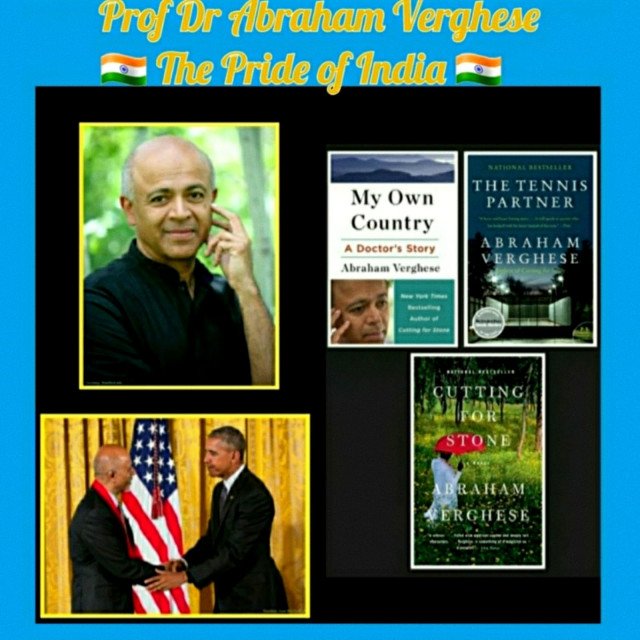 🔸Verghese was born in Ethiopia to native Indian parents belonging to the state of Kerala. His parents were teachers.

🔸After completion of his studies, he moved to United States and had his Fellowship at Boston University School of Medicine in 1980.

🔸Then he became a Professor of Medicine and was promoted as Chief of the Division of Infectious Disease at Texas Tech Health Science Centre, where he served for 11 years.

🔸He is an Empathic Physician with concern for Imagining the Patient’s Experience, which is deeply reflected in his books and novels.

🔸He is the author of two highly acclaimed memoirs…

🔅 My Own Country, his first book – the story of a young physician treating many individuals and families affected by the AIDS epidemic.

🔅 The Tennis Partner, his second book – a story about a medical resident recovering from drug addiction.

🔅 His first novel, Cutting for Stones, was published in 2009 and is an International best seller.

🔸His books have been covered by the New York Times Book Review.

🔸In fact the book “My Own Country” was Dr. Verghese’s autobiography. Later in 1998 it was made into a movie, which was directed by Mira Nair.

🔸In 2007, he was appointed as a Professor for the Theory and Practice of Medicine in Stanford University School of Medicine.

🔸He dedicated himself to Bedside medicine, which had been disappearing in the era of sophisticated medical technology. Hence, he started his mission to bring back the lost art of The Physical Examination.

🔸Dr. Verghese and his associates took the initiative and designed The Stanford 25 to showcase and teach 25 fundamental physical examination skills and their diagnostic benefits to young doctors.

🔸Ultimately, he was honoured for his compassion. He received The Heinz Award in Arts and Humanities, by the Heinz Foundation in 2014 and the National Humanities Medal from President Barack Obama for his literary work and medical service in 2016.

🔸Dr. Verghese declared that his work on Stanford 25 is nothing more than what he had earlier learned from Indian medical Institutions.

The Model of a Caring Physician