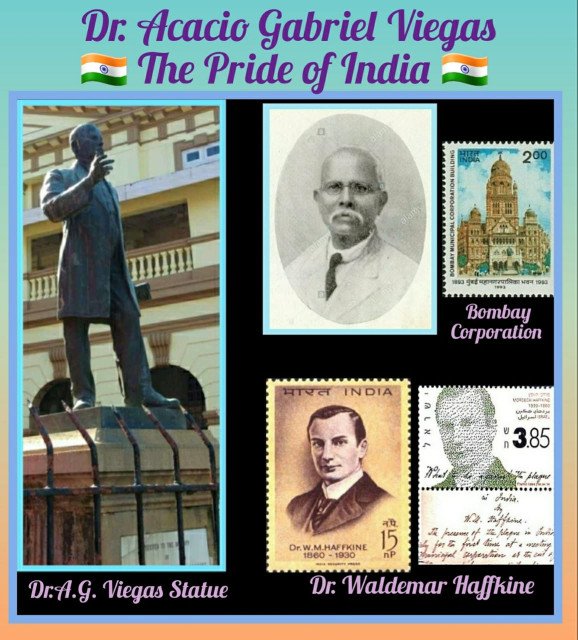 🔸Acacio Viegas was born in Arpora, Goa. He had his school education at Bombay. Then studied medicine at Grant Medical College, Bombay and completed his graduation in 1880 with first-class grade.

🔸After his medical graduation, he started his private practice at Mandvi in Southern Bombay.

🔸In fact, Dr. Viegas served the public not only through his clinical practice but also by his political service. In 1888, he was elected in the Bombay Municipal Corporation for five consecutive years.

🔸A mysterious disease hit the city of Bombay in 1890s, thousands were rapidly affected and it became an epidemic. So many fled from the city and the flourishing textile industry faced a huge economic loss.

🔸As a responsible medical practitioner, Dr. Viegas did his research and discovered the outbreak of Bubonic plague in the city in 1896 and also identified that rats were the carriers.

🔸Once his diagnosis was proven, the Governor of Bombay invited Ukrainian Physician Dr. Waldemar Haffkine, who had previously developed a successful anti-cholera vaccine, to develop a vaccine for the Bubonic Plague.

🔸Further, Dr. Viegas involved himself in the vaccination campaign by educating the masses and he personally inoculated nearly 18,000 Bombay residents. This timely work helped save many lives in the city.

🔸In 1906, Dr. Viegas was elected as the Mayor of Bombay. Thereby, he continued his efforts to improve the standard of living of people in the city.

🔸Subsequently, he launched a forceful campaign to clean up the slums and exterminate rats – the carriers of the plague.

🔸He also paid attention to improve the living of the poor and the downtrodden people in the city by reducing the public transport fares and electricity costs. Also, he introduced free-of-cost midwife services and free-of-cost compulsory primary education.

🔸Undoubtedly, Dr. Viegas was successful not only as a physician but also as a public servant throughout his life.

🔸As a result, he was widely respected and loved by all. This is evident by his beautiful life-size statue that was erected posthumously in 1936 at Cowasji Jehangir Hall opposite to Metro INOX Cinemas, Mumbai.

A Dedicated Physician in Public Health